Johnson County Commissioner Mike Brown will ask the county commission to be more transparent after members of the public have been shut out of meetings and had their comment time severely restricted over the last several weeks.

“Transparency is paramount to me and public comment is a component of transparency. The public must not be forced into silence and must be allowed to speak on the topic of Public Health statistics and reports. It’s the right thing to do and must begin immediately,” Brown said.

Several Johnson County residents last week addressed the county commission about gating criteria and mask mandates related to COVID-19, but their time before the commission was limited and none were permitted to stay inside the meeting room–before or after their comments–thanks to rules that keep the public at arms’ length.

Prior to COVID lockdowns, the county commission room was often standing room only, but now only four members of the public are allowed in the room during meetings, despite a room large enough to allow additional guests while maintaining social distancing.

Those wishing to speak before the commission must sign in and wait their turn in the hallway, where social distancing isn’t enforced. Large windows line one segment of the meeting room, and until recently, closed curtains kept those waiting in the hallway from even seeing into the room when commissioners were conducting business.

In normal times, those wishing to make public comments were given 5 minutes to speak, but Johnson County residents were cut off after three minutes during public comments at the September 3 meeting. 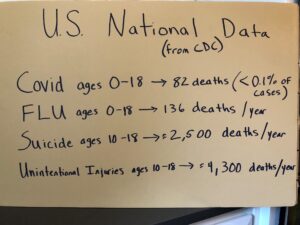 Dr. Christine White, a pediatrician, spoke first during the public comments period of the meeting.  She showed commissioners that kids aged 0-18 are much more likely to die from the flu, suicide, and unintentional injuries than COVID.

Like another several people waiting in the hallway, White wanted the commission to reconsider its COVID-related mandates. Specifically, she asked that the board reconsider its gating criteria that school districts are using to decide when students can learn in person.

“I see and speak with my own patients daily and know the deep impacts our societal choices are having on our children. And I can tell you the impacts have been devastating to our children’s and teens’ physical and mental health,” White told the commission.

The county’s gating criteria recommends school children attending hybrid or virtual school only until less than 5 percent of those tested receive positive COVID tests over a two-week period. White asked that the criteria be expanded to include absenteeism and hospital capacity.

Johnson County board agendas are divided into several segments including public comments, consent and action agenda, and reports and communications. Members of the public are permitted to provide comments on any topic during public comments, and on agenda items, as they occur. The rules for each are different. During public comments, the commission enforces time limits, but during an agenda discussion, there are typically no time limits, the commissioners can ask questions of the residents who comment, and speakers are often allowed to use the county’s computer to present slides and other information.

That courtesy was provided to Matt Keys, a Stillwell homeowner who spoke in support of a resolution promoting safe and responsible use and discharge of firearms in unincorporated Johnson County during that Sept. 3 meeting. Keys presented pictures of his property and photos on large screens and spoke for nearly 10 minutes. Meanwhile, Dr. White was denied access to the computer so she presented COVID statistic charts on poster boards that she held up.

Over the last month, the commission has listened to dozens of comments about COVID-related mandates during public comments, but commissioners haven’t considered the topic as an agenda item. That decision has limited the amount of time the public can speak on the topic and moved any discussion of those items to the end of the meeting when members of the public are likely to have left since they aren’t allowed in the meeting room and typically 2-3 hours pass between public comments and reports — the section on the agenda where the commission has been discussing COVID data and mandates.