One of Governor Kelly’s closest allies in the Legislature, state Sen. Barbara Bollier, a retired Mission Hills physician, said one of her biggest concerns is that without Medicaid expansion, people who develop COVID-19 symptoms may wait longer to consult a doctor, exposing others to the virus if they don’t self-quarantine.

“A virus doesn’t check to see if you have insurance first,” said Bollier, a Johnson County Democrat running for U.S. Senate.

It is not clear, however, that Medicaid expansion would do what Bollier — and Kelly — claim it would. 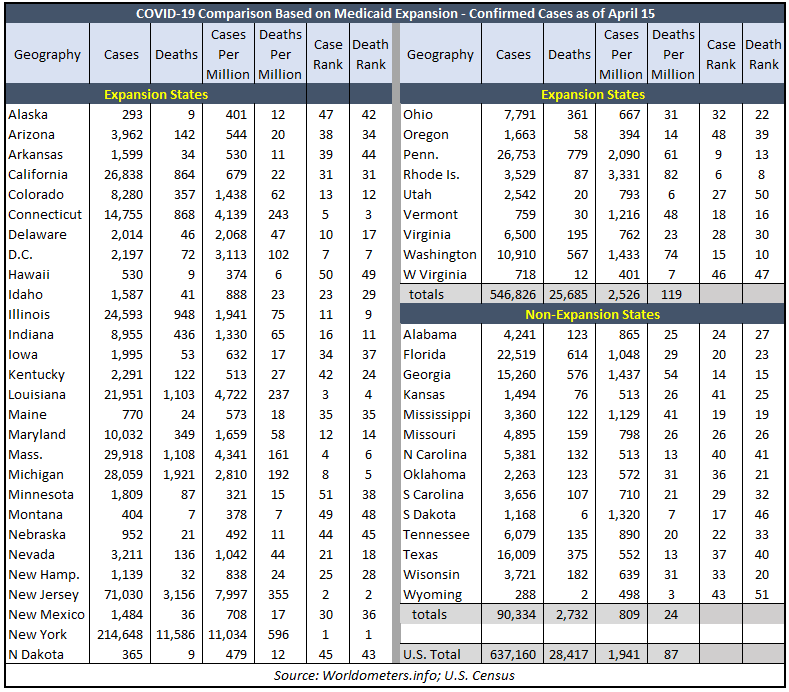 According to Foundation for Government Accountability Research Director Nicholas Horton,  the implication here is clear.

“I think this confirms what we’ve always known, which is that ObamaCare expansion is not a cure-all,” he said. “For non-expansion states, I think the takeaway is abundantly clear: Medicaid expansion isn’t a cure for the COVID-19 pandemic. States should instead be focused on solidifying & preserving their programs for the truly needy.”

Kansas Governor Laura Kelly has lamented the fact that Kansas has not expanded the federal Medicaid program repeatedly, and most recently claimed the added $1 billion in federal dollars, telling KSN expansion would have given hospitals “better bottom lines and better cushions to ride this through and then better ongoing revenue.”

However, critics contend, that’s simply not the case.

Currently, non-disabled single adults without children do not qualify for Medicaid, but even so, according to Sam Adolphsen in the Washington Examiner, the costs will almost certainly exceed the benefits.

“In Kansas, the Medicaid budget has quintupled just since 2000 — and that’s without Medicaid expansion,” Adolphsen wrote in January.

And, a 2019 essay by the Civitas Institute points out that Medicaid costs have exceeded models in every state which has passed the expansion.

According to the article, “In 2014, the last fiscal year before expansion was implemented, Medicaid comprised 24.5 percent of state budgets nationally. Since expansion, that number has grown to 29.7 percent. Looking at the state level, the reason for the tremendous growth is clear. As of February 2018, every expansion state with available data had exceeded projected costs.”

Not only that, but nationally, expansion has cost states 157% more than expected and the average cost overrun is 92%.

So why, then, the push for expansion of a program likely to overrun projected costs when the state is facing potential multi-billion dollar revenue deficits in the next two years?

Horton says it comes down to politics.

“The left and Governor Kelly don’t want to let a good crisis go to waste,” Horton said in a telephone interview Wednesday. “I think they’re seizing the moment or trying to seize the moment and frankly take advantage … in a very cynical way, of what’s happening to our country and our economy right now.

Kansas Policy Institute, which owns the Sentinel, published a 40-point COVID Economic Recovery Plan earlier this week, noting that more needy Kansans are liable to be accessing the Medicaid program as the economic downturn puts more people out of work.

Horton agreed and noted that expanding the program to able-bodied, childless adults would likely put more stress on a system that could be overburdened to start with.

“If you expand the program to able-bodied, childless adults, you’re going to overflow the system with people who, you know, Medicaid was never intended for,” Horton said.

Kelly’s argument, that expanding Medicaid would help bring more funding to struggling hospitals, isn’t a new one for her. When the Mercy Fort Scott Hospital closed in 2018, Kelly said at the time: “Simply put: if Kansas had expanded Medicaid, Fort Scott would still have a hospital.”

However, that simply wasn’t the case.

The Pittsburg Morning Sun found that Mercy Fort Scott was so far in the red, that Medicaid expansion simply wouldn’t have made any difference.

“I know it’s the opposite, because we’ve seen this play out in every single state.” He said. “States, and the left, argue that by adding hundreds of thousands of people to welfare, we’re going to save money — in no world is that true.

“I think Kansas policymakers are right to be very concerned about what an economic downturn might do to their state budget. I think Medicaid expansion would be like throwing gasoline on that fire. Every single state that expanded Medicaid has exceeded their cost projections and their budget for what they said it was going to cost. On average they’re spending more than twice as much — or two and a half times what they said they would spend.”

Horton argues that this would simply be a new welfare program that would disincentivize work at a time when Kansas is going to need to find ways to get residents back into the workforce as quickly as possible.”

In the end, Horton said, this is simply another back-door push to try to implement a single-payer system.

“I think it’s … it’s an opportunity to use a crisis to get something that the left has wanted for a very long time, which is universal health care and Medicaid for all,” Horton said. They want more dependency, and Medicaid expansion is a great opportunity to advance that cause.

“I think that’s the opposite of what the state should be doing right now.”