Late last week, Kansas Policy Institute released a report showing the state of Kansas is facing potential state budget deficits between $1.1 billion and $2.1 billion over the next two years. KPI owns the Sentinel.

With the FY 2020 General Fund budget at approximately $7.8 billion, those shortfalls are significant.

The difficulty in predicting just how bad the shortfalls will be is complicated by the fact that this particular budget crisis has no precedent. While there have been downturns before, this has been created not by internal factors inherent to the economy, but rather by government action to combat a virus.

State Rep. Troy Waymaster, (R-Bunker Hill), who is the chair of the House Appropriations Committee said the effects on the state budget will be “drastic.”

“With so many of our local businesses that are not deemed essential, closed, we will see a reduction in revenues for income and sales taxes,” he said via email. “My wife and I are personally affected by this as my wife’s business has been closed due to the stay-at-home order.  When the Legislature reconvenes, we need to be diligent in addressing the state’s budgetary needs and reduce spending where needed to ensure the financial stability for the state of Kansas.”

Kansas Policy Institute posited two models to give a range of the revenue deficits the state is facing.

In the first, they assumed tax revenue would drop about half of what it did during the 2009-10 recession — and some economists are suggesting it could be far worse. 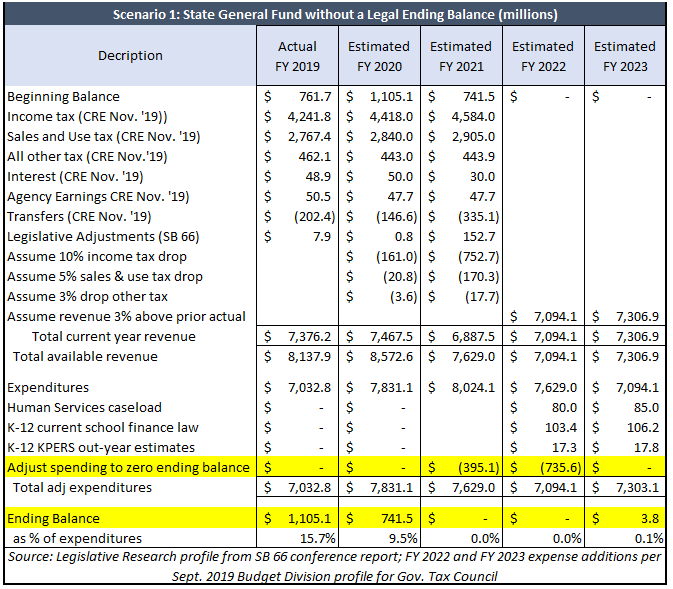 Assuming less than half of that decline shows $1.1 billion in state budget deficits the next two years and leaves just $3.8 million in reserve for FY 2023.

In the second scenario, they assumed revenue declines roughly equal to the 2009-2010 numbers, showing $2.1 billion in state budget deficits over the next two years, leaving $279.6 million in reserve by FY 2023. 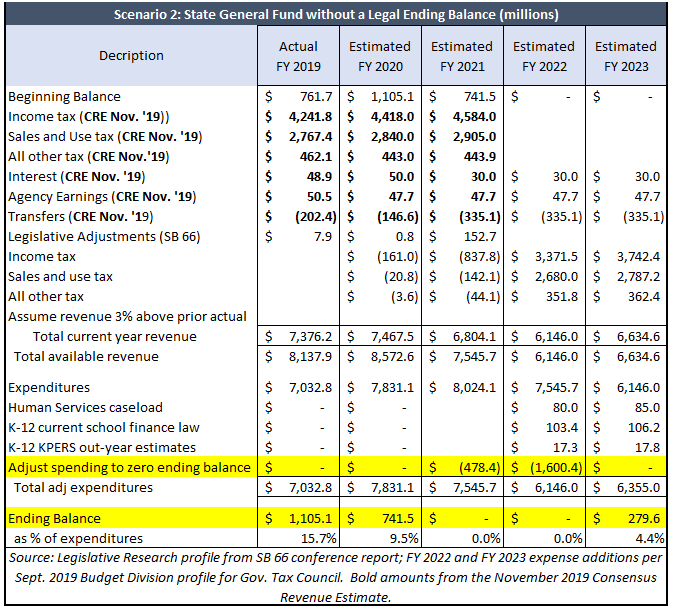 State Sen. Caryn Tyson, (R-Parker), chair of the Senate Taxation and Assessment Committee, said the 2021 budget passed by the Kansas Legislature last month is “beyond belief,” and “over the top” in a time of national crisis. 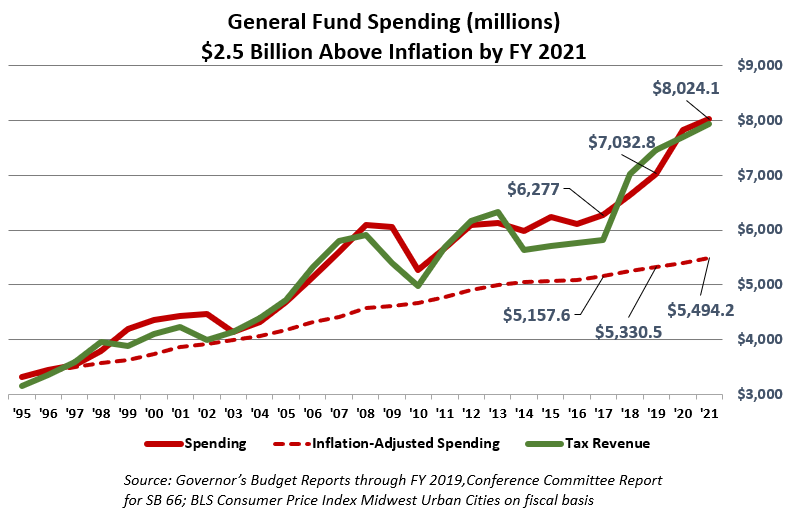 Tyson noted that the GOP-controlled legislature was actually taken to task by Democrat Kansas Governor Laura Kelly for over-spending.

“After thanking the legislature for passing the budget, the Governor admonished legislators for spending over $100 million more than she requested, and she requested a lot,” Tyson said. “This budget’s billion-dollar increase only allots $50 million for the pandemic and $15 million for emergency equipment. This budget thumbs its nose at the situation before us.”

“The Kansas Legislature had an opportunity to be proactive before passing SB66 this session,” Hilderbrand said. “During the debate of this bill, those of us that were in the minority (voting against the budget) brought up the fact that if this bill passes, the state will have to come back and slash its spending, and/or rob from Peter to pay Paul.

“However with the passing of SB66, the majority of the legislators chose to deficit spend in the amount of $528 million, spend $100 million more than what the governor recommended, increased total spending (the All Funds budget) $2.7 billion over what they spent in FY2019, increased the state’s general fund spending by $1.375 billion over FY2018, deleted paying off the $132.3 million PMIB loan, deleted paying off the $268.4 million in KPERS layering payments, and continues to rob from the “Bank of KDOT”.”

Tyson said she had a hard time understanding how anyone could have voted for the budget given the current situation.

“Knowing the state is going to face a drastic decrease in revenue, less taxes collected; income tax, sales tax, fuel tax, and other taxes and fees; knowing taxpayers are facing unforeseen hardships; knowing funds will need to be redirected, why would anyone commit to this budget?” she said. “The excuse used to pass it by some was, ‘maybe it can be fixed when we’re back in session.’  Once in law, changes become difficult.”

Hilderbrand said the road forward is not going to be easy.

“The state is now faced with some very hard decisions on how to balance these fiscally irresponsible budgets,” he said. “Because of the nose-dive in tax collections that are projected as a result of this COVID-19 pandemic, the options for the state are not pretty. Depending on how big of a hit the tax collections take, the state could very well be out of money before the end of this calendar year.

“If that happens the governor will either have to make allotments, skip KPERS payments, borrow from the already depleted PMIB fund, or rob even more money from the ‘Bank of KDOT.’ If the state doesn’t run out of money until the end of the fiscal year, Kansans can expect to see a push to raise their taxes. It will be up to  the legislature and the governor to make those very tough decisions.”

Yesterday, KPI published their 40-point COVID-19 Economic Recovery Plan with suggestions on how to handle this crisis without raising taxes on Kansans already burdened by the effect of the economic shutdown.

Among those suggestions are spending cuts in the form of hiring freezes, and simply not filling positions which have been open for more than six months, tax and regulatory reform to encourage spending and business creation, as well as establishing an independent, auditable cost/benefit analysis program for all new regulations. Implement the same procedure for existing regulations.

Referencing the state budget deficits, KPI says, “The ‘good’ news is that the state has lots of room to reduce costs, based on comparisons to other states.”