To hear Topeka Superintendent Tiffany Anderson talk about student achievement in her district, you would think it is pretty good overall.  But as is often the case with education officials, the facts tell a shockingly different story.

Anderson’s email response to a parent’s inquiry said “various schools” made academic gains.  She said, “the majority of our schools have steadily improved.”  And while acknowledging that “continued progress is needed,” Anderson noted that “In 2019, 23 of the 26 TPS schools increased in math or English on states tests and in 2019 and 2021, numerous schools outperformed the state on the state standardized assessments.”

Nowhere does Anderson cite specific results, and that is because the facts are pretty ugly. 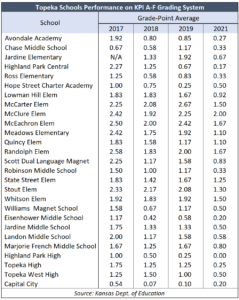 The Sentinel asked Anderson to provide documentation to substantiate her statements, but she chose not to respond to our questions. The Director of Instruction merely sent links to the state website.  But even without her documentation, we can examine each school’s overall performance over time.

Kansas Policy Institute’s A-F Grading System translates state assessment scores into letter grades, based on the KSDE cut scores and definitions.  Each grade level tested (3-8 and 10) gets four letter grades – Math and English language arts for low-income students and their more affluent peers.  All the grades for each school are used to create a grade-point average.  KPI owns The Sentinel.

As for Anderson’s comparing Topeka to state averages, some of the schools have higher scores than state averages for each subject/grade/cohort, but that isn’t a high bar.  It’s akin to having a C-minus with the state average at a D-plus.  Most scores for Topeka schools are below state averages. 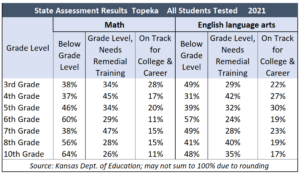 The adjacent table shows results by grade level for math and English language arts on the 2021 state assessment.  The ‘best’ result in math is 28% proficient in 3rd-Grade Math and 30% proficient in 5th-Grade ELA.  KSDE equates proficient with ‘on track for college and career.’

Anderson’s email is typical of the statewide efforts to keep the truth of student achievement from parents – relatively meaningless word salads and some claims that are arguably not true.  For example, the data does not show that the majority of Topeka schools “have steadily improved in performance.”

In another example, she says, “the schools with challenges are being closely monitored and they are using resources to address academic progress.”  State law requires districts to conduct annual needs assessments of each school to identify learning barriers and make the appropriate budgetary adjustments.  But USD 501 Topeka is one of many districts examined last year that could not produce any record of having done so.

Parents should be able to trust education officials to be straight with them, but in most cases, they cannot.  Verify everything, and feel to contact The Sentinel or Kansas Policy Institute for assistance.