Legislators and others feared Kansas Governor Laura Kelly would drag out her economic shutdown when she wouldn’t identify specific criteria for moving to the next phase, and today those fears were validated.  As of this morning, 22 of the state’s 105 counties still have no confirmed COVID cases, and 24 other counties have three or fewer cases.  The infection rate statewide is just one-quarter of one percent of the population.

Her reopening plan called for moving to Phase 2 as early as May 18, but that has been indefinitely delayed.  A new Phase 1.5 will allow salons and barbershops to open for appointments only on May 18, and gyms will be allowed to open except for group classes and without lockerrooms. 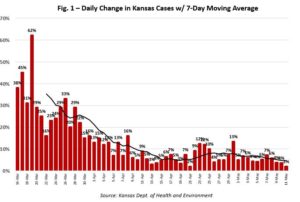 Kelly is quoted in her press release, saying “Unfortunately, the daily rate of disease spread has not shown the downward trajectory necessary to move fully into Phase 2. I said from the beginning that public safety must remain the top priority, which means that our reopening efforts must be driven by data, not dates. Phase 1.5 will continue our transition, but with necessary caution.”

Yet Kelly refuses to say what data justifies her actions, or what data-driven target must be met to move forward.  Making matters worse, her administration stopped providing daily updates on Monday, May 11.  Going forward, they will only provide updates on Mondays, Wednesdays, and Fridays. 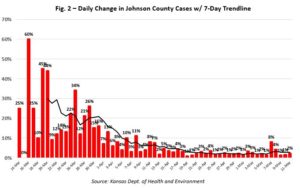 Through May 11, however, the daily increase in new cases is definitely trending down.  Figure 1 above shows the 7-day moving average trend for the entire state, but that includes a few counties with contained outbreaks in prisons and nursing homes.

The downtrend in Johnson County, the states’ most populous, is even more pronounced.  There, the 7-day moving average of the daily increase is just 2.83%, with little room to decline.  The bump on May 7 came when the state starting counting ‘probable’ cases in 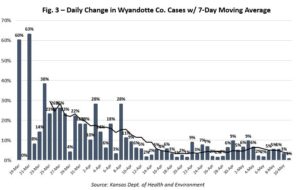 addition to ‘confirmed’ cases, which was another way the Kelly administration has been less than transparent on their decision-making.

Wyandotte County has some of the nursing home outbreaks but is also trending down.  Their 7-day moving average of the daily increase is just 3.2% and only two-thirds of one percent of the population is confirmed or suspected of having COVID. 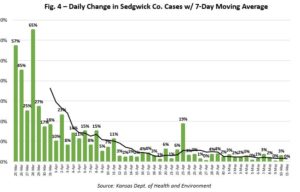 The 7-day moving average in Sedgwick County, the state’s second-largest, is just 1.4%. A few hot spots in long-term care facilities occasionally caused a bump, but still, only nine-hundredths of one percent – 0.09% – are confirmed or suspected of being infected.

In Shawnee County, the state’s third-most populous, only one-tenth of one percent of the population is confirmed to be infected, and the 7-day moving average of new cases is 3.7% 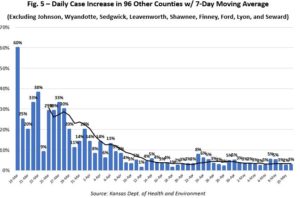 Not counting the state’s five most populous counties and the four with outbreaks in meatpacking facilities, the other 96 counties collectively have a low daily increase and are trending down.  The 7-day moving average is just 3.23%.

No one knows who low Governor Kelly expects the daily increase to be before allowing everyone to get back to work and start repairing their lives, but the rates can’t get much lower.  The only thing really trending up is the economic misery caused by the shutdown orders.

“Yesterday at the meeting of the State Finance Council, I asked Governor Kelly if she would be moving the state into Phase 2 of the plan to reopen Kansas as scheduled. She would not give a clear answer. Today, the Governor announced the state would not be moving into Phase 2. Instead, we will be entering a never-before-mentioned Phase 1.5. The Governor chose to withhold this important information from legislators during the State Finance Council. Governor Kelly has consistently failed to give Kansans straight answers and clear goals. Our struggling families and businesses don’t deserve even more uncertainty during this time. The legislature will address this abuse of power when we return to Topeka on May 21.”

The economic misery will only worsen, according to Michael Austin, director of the Center for Entrepreneurial Government at Kansas Policy Institute (which owns the Sentinel).

“It is troubling the Governor has again halted the state’s economic recovery.  However, what’s even more alarming is that Governor Kelly couldn’t even stick to her original televised re-opening plan. Such uncertainty shakes our trust as to whether government can handle getting us out of the lockdown policy it started.”