Once again, the Kansas Department of Health and Environment and media are collaborating to deceive Kansans about the effectiveness of mask mandates.  To be clear, this isn’t about whether masks are beneficial; it is strictly about whether government mandates work.  After two previous efforts were debunked, KDHE and their media friends tried it a third time yesterday, with a Kansas City Star headline falsely proclaiming “CDC report: COVID-19 cases dropped in Kansas counties with mask orders, rose in others.”

So how do KDHE and media justify their false claim that “cases dropped” in the counties that followed the governor’s order?

Dr. Russ McCullough, founder and director of the Gwartney Institute at Ottawa University, explains the deception.

“Cases per 100,000 is not what is being measured in this study that shows a downward trend.  They are showing the rate of change of 7-day average cases, which does not fully reflect the story in Kansas.  The evidence provided by this graph does not conclusively show that the mask mandate worked, there are many other factors needing to be considered.”

Only people intent on deceiving readers would claim cases dropped in counties with mandates when cases increased 207%.

Here’s a chart from the CDC report, which makes it appear that cases went down in the mandate counties but increased elsewhere. 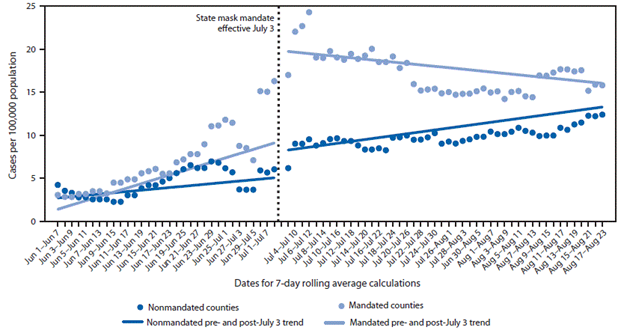 KDHE doesn’t publish daily case statistics so we can’t replicate their 7-day rolling average numbers, but we can get close by tracking the change from one week to the next.

The table on the left below shows the total cases per 100,000 of population for both county cohorts. The middle section shows the weekly change in cases; for example, the mandate counties went from 411 cases on July 3 to 526 on July 10, for an increase of 114 cases.  An increase of 114 cases for the week ending July 10 represents a 28% increase over the 411 case total in the previous week as shown in the table on the right.

The percentages in the right-hand table are charted below, starting with the 28% increase for the mandate counties, followed by a 27% increase (over the previous week’s total), then 19%, 13%, and so on.  KDHE and media only show this type of chart because it gives the appearance that cases declined in the counties with mandates.

Now look what happens when you chart the cumulative number of cases per 100,000 of population.  It’s a completely different picture, which makes it crystal clear that the mandate counties had much faster growth.

On July 3, the counties without mandates had more than twice as many cases per 100,000 of population than the counties with mask mandates, but because they only grew by 54% while the mandate counties’ cases jumped 207%, both groups had almost the same number of cases on August 21.

Factors not considered in CDC report

CDC seems to have only considered one variable – whether counties had a mask mandate.  But even though cases were adjusted for population differences (roughly 1.96 million in the mandate counties and about 953,000 in the other group), there were other factors at play.

The virus didn’t spread uniformly across counties, but initially hit the more densely populated urban areas and gradually spread to rural counties.  On July 3, there were nine counties with no cases among those that didn’t adopt the mandate and six more counties had just one case; but every county that adopted the mandate had at least two cases.

As my colleague Michael Austin notes, “Many national polls revealed Americans like masks, and two independent surveys say over 90% of Kansans, in both mandated and non-mandated counties, wear masks at some frequency.”

Without adjusting for these and other variables, one cannot reasonably conclude that mandates work.

This isn’t the first time that media and government officials collaborated to mislead Kansans about the efficacy of mandates.  (Remember, this isn’t about whether masks are beneficial; it’s about badgering you to do whatever the hell the governor and other officials order you to do.)

Then, one day after Governor Kelly announced she wanted another statewide mandate, friendly researchers at the University of Kansas just happened to release a report claiming that mandates work.  But the Sentinel also shot that one down; we caught them doing something similar to the CDC report, hiding the much larger cumulative case growth in counties with mandates.

We wrote to management at the Kansas City Star, the Wichita Eagle, Lawrence Journal-World, and the Kansas Reflector to let them know they’d been duped by Norman, Kelly, and the KU researchers.  We shared the real data with them and offered to help them inform their readers what really happened but to date, each is allowing the deception to stand.

COVID is a serious situation but that’s no excuse to abandon the truth.  The job of media and elected officials is to provide all the information and allow citizens to make their own informed decisions.  Media and some elected officials may prefer a socialist society so they can order people what to think, but thank goodness freedom of speech and thought still exist in our constitutional republic. 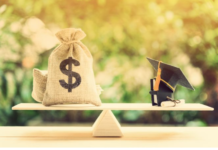