The Kansas Legislature’s Special Committee on Education held a hearing on student achievement this week, and the message from the Department of Education was exactly as expected.  To hear them tell it, education officials still have work to do but all things considered, student achievement is good overall.  And of course, the gains are the result of funding increases…send more, please.

They blamed COVID for declines on state assessment scores.  They said more kids taking the ACT exam is the reason those scores declined.  But graduation rates are improving, and more graduates are enrolling in college and technical certification programs; so overall, things are good.

Now here is a short list of important facts they didn’t mention:

— There are more high school students below grade level than are on track for college and career.  This has gotten worse since 2015.

— Only about a quarter of high school students are on track for college and career.  That has also gotten worse since 2015.

— Many students who receive diplomas are below grade level in reading and math.

— Spending per student is almost $6,000 higher than the inflation-level since 1998, but reading proficiency is lower.  (Only a third of 4th-Grade and 8th-Grade students read proficiently.)

COVID can only be blamed for a portion of the decline in state assessment scores, and some of that is because some school districts chose to keep students out of school most of the year.  Pre-COVID, the percentage of students on track for college and career was lower in 2019 than in 2016, and the portion of students below grade level was getting worse.

Deputy Commissioner of Education Brad Neuenswander repeated the false narrative that schools had suffered funding cuts in prior years, saying schools were able to hire more teachers once money was “put back.”  But KSDE’s own numbers show a steady increase in per-student funding. Funding didn’t increase as fast as school officials wanted, so they call that a ‘cut.’ 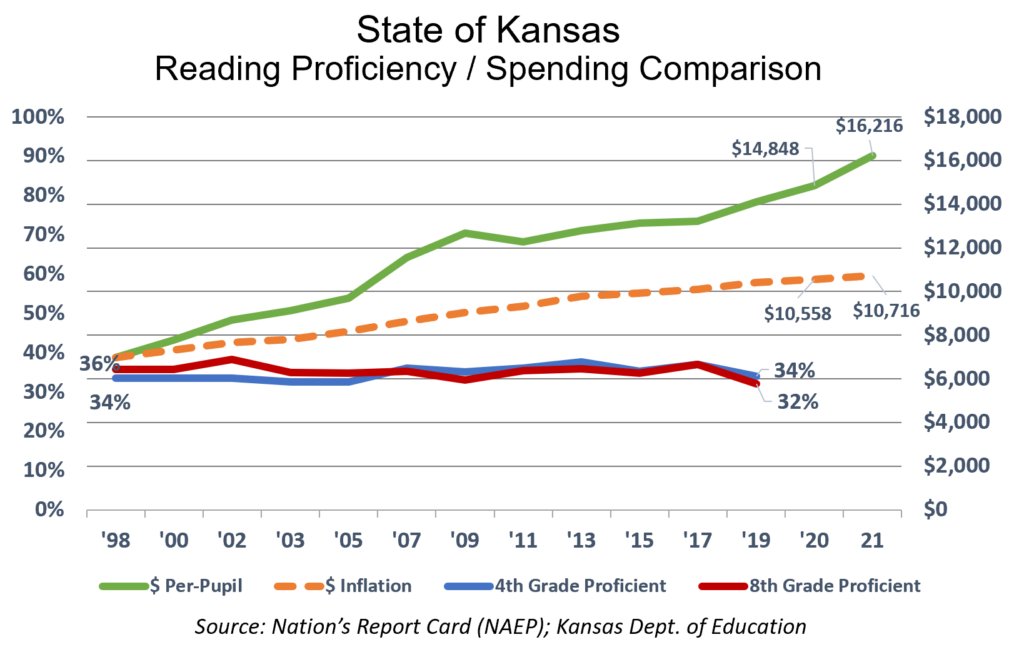 It’s true that having more students take the ACT test tends to produce lower average scores, but ACT scores were falling before participation increased.[i]  The percentage of Kansas graduates who were college-ready in English, Reading, Math, and Science fell from 32% in 2015 to 27% in 2019; now, only 21% are college-ready.

Neuenswander never mentioned that only 21% are college-ready, but he’s right in saying scores will likely decline more until about 95% take the ACT (it was 79% this year).

Now think about that.  KSDE knows that college readiness could fall into the high teens, but instead of sounding an alarm, they want parents to focus on graduation rates and the number of students going into post-secondary training.

The choice, then, remains before the legislature. Continue to be ignored while spending record sums on education? Or empower parents to take those resources and find the right fit for each child? Florida implemented school choice in the late 1990s and their public schools improved dramatically. Give parents and children freedom and the rising tide will lift the boats of kids, public schools, the economy, and the entire state.