USD 231 Gardner Edgerton earlier this week blamed “confusing” questions from the Kansas Dept. of Education (KSDE) for reporting the district offered onsite learning for middle school and high school students for the first quarter of 2020.  But information obtained by the Sentinel from KSDE shows the district reported that between 1% and 25% of students were on remote learning, and no students were on hybrid learning.

The initial submission shown below asked “For each of the following weeks, about what % of students in your MIDDLE school building(s) participated in learning services in a REMOTE LEARNING environment? (REMOTE = all days were Remote Learning).  The same question was asked about high schools.

USD 231 said 1-25% were remote in response to both questions.  Asked the same questions about hybrid learning (a combination of remote and onsite), USD 231 clicked on the 0% buttons for each week. 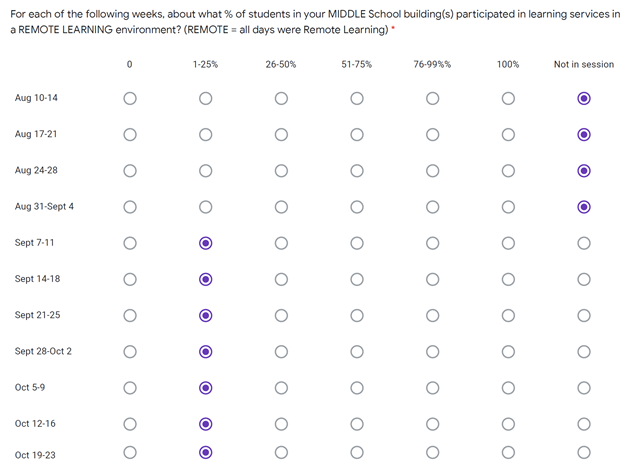 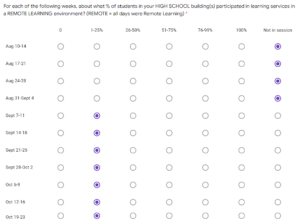 Based on those submissions, KSDE correctly interpreted their responses as indicating that the majority of middle school and high school students were in onsite learning the majority of the time.

After Sen. Molly Baumgardner noted a discrepancy in the Senate Education Committee hearing when the reports were reviewed, USD 231 sent revised replies, checking the buttons that said between 76% and 99% were in remote learning.

The questions from KSDE were crystal clear; even middle school students would know how to respond.  So it begs credulity that adult board members and administrators would try to pass off reporting students as being onsite on ‘confusion.’

The public behavior by several – but not all – USD 231 board members was and continues to be outrageously inappropriate.

The Gardner Edgerton board members responsible for the written and verbal attacks on Sen. Baumgardner owe her a very public and profound apology.  They should also apologize to parents and to KSDE for their childish behavior and blame-shifting at the board meeting, comments on social media, and in written statements to legislators.