The magnitude of the state income tax increase caused by Governor Kelly’s veto of legislation to offset the effect of federal tax changes appears much greater than estimated.  Kansas tax revenue for the fiscal year ended June 2019 was $440 million higher than the previous year, and almost all of the increase came from an 11% jump in individual and corporate income tax. 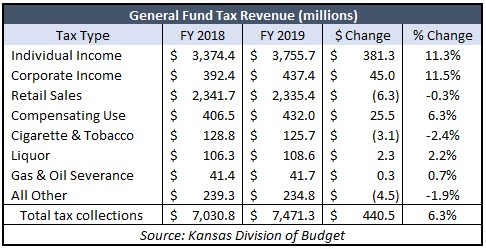 There is no economic data that indicates a double-digit jump in income tax receipts comes from organic growth. Personal income for calendar 2018 showed a mere 3.2% increase and GDP rose just 2.1%.  A $6 million decline in retail sales tax further contradicts the notion that economic growth is the cause of an 11% increase in state income tax collections.

Most media reports emphasized the headlines but failed to provide any context for the increase.  KWCH-TV in Wichita, for example, said Kansas ended the year with “…solid revenue growth” and collected more money than anticipated.

Alan Cobb, The Kansas Chamber President and CEO, in a statement to the Sentinel says the higher taxes are due to Governor Kelly. “The state’s tax revenues exceeding expectations by $191 million is directly related to Gov. Laura Kelly’s two vetoes of legislation that would have stopped unintended state tax increases because of recent changes in federal tax codes,” says Cobb. “It is disappointing Governor Kelly broke her campaign promise to not increase the tax burden on Kansas families and businesses barely five months on the job.”

Federal tax changes encouraged the repatriation of profits earned overseas, and legislation vetoed by Governor Kelly would have prevented multinational companies from being taxed on foreign profits brought back.  Since Kansas conforms to the federal tax code for itemizing personal deduction and the federal standard deduction was doubled, more Kansans taking the standard federal deduction means they can’t itemize for state purposes, and thereby pay higher state income tax.  The legislation vetoed by Kelly would have allowed Kansans to itemized regardless of what they did on their federal return.

“Increasing the tax burden on Kansans is not how to grow the state’s economy. Rather, it puts Kansas at a competitive disadvantage and discourages businesses from investing, expanding, and creating more jobs in their communities,” says Cobb.

Tax revenue was $1.6 billion above the inflation-adjusted level in 2013; this year’s new record is $2.4 billion higher than if increased for inflation. 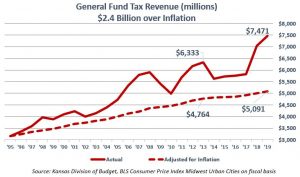 Governor Kelly says more tax revenue is to replenish state coffers run dry by the Brownback administration, but Kelly is spending over a billion dollars more than projected tax revenue over the next four years. As the Topeka Capital-Journal deftly points out, though, higher tax revenues are not enough to avoid looming budget shortfalls, which can be only be dealt with by cutting spending or raising taxes. Neither Governor Kelly nor most legislators appear willing to do anything to reduce spending.