Kansas personal income grew just 3.2% in 2018 while the nation as a whole grew 4.5% according to estimates from the Bureau of Economic Analysis. It was one of the lowest growth rates in the country, ranking 46th and with only four states doing worse.  Kansas was ranked 43rd in the nation in 2017. 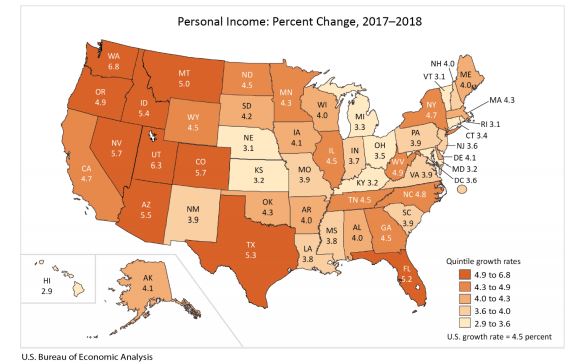 Kansas’ growth was slightly higher than Nebraska’s rate of 3.1% but behind all other neighboring states, with Colorado growing 5.7%, Oklahoma at 4.3% and Missouri at 3.9%.  These growth rates are not adjusted for inflation.

Ted Bolema, Executive Director of the Institute for the Study of Economic Growth at Wichita State, is not surprised at the news.

“It is consistent with all the other data we have been seeing that it just rather a flat or slightly growing economy at a time when the rest of the country is doing considerable better,” says Bolema.

Bolema is happy personal income is growing, but syas there is plenty of room for improvement.

“It’s positive; that’s the good news,” says Bolema. “It could be better when we look out at other states.”

The BEA release credited growth within the industrial sectors of construction, professional and scientific services, and information for states like Arizona, Washington and Utah growing so much. In Kansas, the highest earnings growth was in manufacturing and transportation warehousing, both of which exceeded the national average. 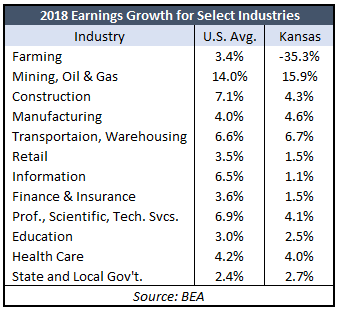 Yet, Kansas missed out on big growth in the areas like construction and information. Construction earnings grew 4.3% in Kansas versus the national average of 7.1%; information earnings gained a meager 1.1% in Kansas but jumped 6.5% across the nation.  Earnings growth comes from a combination of higher wages and more employment within a sector.  growth as it relates to personal income was half the national level.

“Not too surprising when you also hear the sales tax news this week. That revenue is flat or even down so far this year. So it is consistent with personal Income,” says Bolema.

Kansas retail sales tax collections are down 1.1% for the first four months of 2019.