Data released this morning by the Bureau of Economic Analysis shows the Kansas economy grew much slower than the national average in 2018.  Kansas’ real (inflation-adjusted) private sector Gross Domestic Product (GDP) grew by 2.1% compared to 3.0% for the nation.

Kansas also grew slower than all but one neighboring state, Nebraska, which improved 1.9%.  Missouri  (2.8%), Oklahoma (2.2%) and Colorado (3.8%) did better than Kansas.  Kansas outperformed the nation in 2016 but has been well below the national average the last two years.

The adjacent table shows GDP change for some key industries in the private sector.  Manufacturing and wholesale trade outpaced national growth, but all other major sectors lagged behind.   The Finance, Insurance and Real Estate segment, the second largest in Kansas, fell by 0.6% while the nation had a small gain of 0.5%.  Professional Services and Education & Health Care segments both posted decent gains although less than the national average. 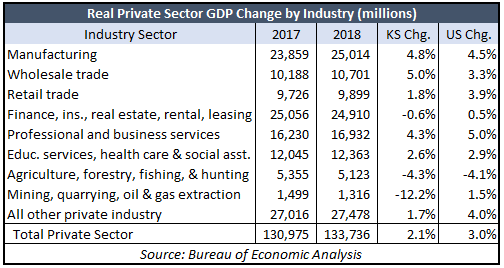 Retail trade had a small gain of 1.8% but was much lower than the national average of 3.9%.

Agriculture contracted by 4.3% in Kansas compared to a 4.1% decline for the nation; agriculture by itself is a rather small segment of the Kansas economy (less than 4%) but it also impacts other sectors.

Oil and gas extraction is another sector that has an outsized impact on other sectors; here, Kansas experienced a 12.2% decline while the nation as a whole had a small gain of 1.5%.

Kansas is in its fourth consecutive decade of economic stagnation.  In the 39 years since 1979, Kansas trailed the nation 28 times.