Governor Laura Kelly is attempting to position herself as a moderate, bipartisan governor to get re-elected, but her veto record shows otherwise.

The Kansas City Star reported in May of last year that Kelly had vetoed 8 bills and used her line-item veto on the budget 18 times, the most since Kathleen Sebelius in 2004 — who made no pretense of being bi-partisan.

However, this year she vetoed 11 more bills — many with bipartisan support.

In total, since 2019, Kelly has vetoed 28 bills and had eight overridden. 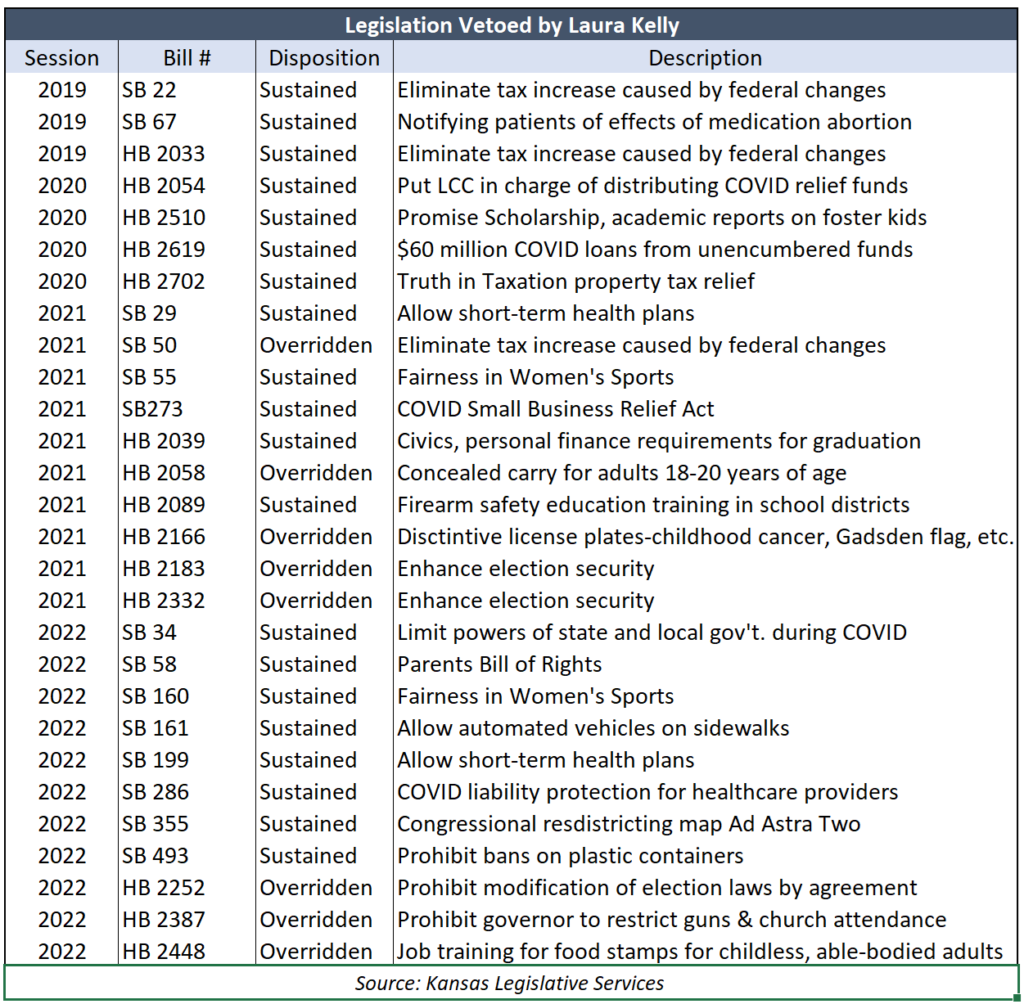 Moreover, Kelly issued only seven vetoes in her first two years in office — an increase more than double in the last two sessions.

Indeed, Kelly issued six more vetoes than the 22 issued by Democrat Kathleen Sebelius in her first four years, and Sebelius was a very partisan Democrat.

HB2387, which prevents the administration from issuing any requests for proposal or entering into new contracts to administer medical assistance benefits until Jan. 31 of next year — after either a new governor takes office or Kelly is sworn in for a second term.

The bill also amends a statute in the Kansas Emergency Management Act to specify that continuing limits on the governor’s power regarding firearms or ammunition apply under KEMA or any other law. The bill also states the governor shall not have the power or authority under KEMA or any other law to prohibit attending or conducting any religious service or worship service in a church, synagogue, or place of worship.

Kelly famously ordered churches closed for Easter in April of 2020 while allowing malls and libraries to remain open. Kelly ultimately backed down after a federal judge issued a preliminary injunction against the order.

HB2252 prevents the governor or any other executive branch member — including the Kansas Secretary of State — from entering into a consent decree or other agreement with any state or federal court or any agreement with any other party regarding the enforcement of election law or the alteration of any election procedure without specific approval by the Legislature.

HB2448 requires the Department for Children and Families to make all able-bodied adults without dependents (ABAWDs) subject to the food assistance work requirements established by federal law for an employment and training program. The provisions of the bill apply only to ABAWDs aged 18 through 49 and only to individuals who are not employed at least 30 hours per week.

Two civil rights bills vetoed by Kelly, which the Kansas Senate voted to override, failed to gain enough votes in the Kansas House of Representatives.

The House voted 72-50 to override Kelly’s Veto of Senate Bill 58, the Parents Bill of Rights,” which states that all parents have a right to direct their child’s upbringing, education, care, and mental health. Twelve Republicans joined 38 Democrats in voting to sustain Kelly’s veto.  The bill enumerated 12 rights reserved by the state for parents regarding their children. Such enumerated rights would have included, but would not have been limited to, the right to direct the education and care of the parent’s child and the right to direct the upbringing and moral or religious training of the parents’ child. However, the House fell short of the 84 votes needed to override.

The Kansas House also failed to override Kelly’s veto of Senate Bill 160, which would have prevented biological male athletes from competing in girls’ sports.

The House originally voted 81-41 to pass the bill and came up three votes shy of the 84 needed to override the veto.  Three Republicans joined 37 Democrats to sustain Kelly’s veto.

The Senate had already voted 28-10 to override.