Instead of asking hard questions about obviously misleading statements in Gov. Laura Kelly’s veto of HB 2033, reporters across Kansas acted as though they were her deputies pushing a message.

House bill 2033 was a second attempt by legislators to reverse an unintended state income tax resulting from federal tax reform. It would have allowed taxpayers to itemize deductions on their state return even if they took the federal standard deduction, prevented companies from having to pay income tax on money not earned in Kansas and used increases in use taxes from online purchases to gradually reduce the sales tax on food.

That’s not how media described the legislation, however.

Topeka Capital-Journal reporter Tim Carpenter wrote that the bill “directed the majority of a $245 million tax package to multinational corporations and wealthy individuals.” But Kelly’s veto message made no mention of ‘wealthy individuals;’ that’s one of the opponents’ talking points and also arguably not true.

The federal standard deduction for married couples increased from $12,700 in 2017 to $24,000 last year. People with itemized deductions between those amounts were better off itemizing for federal purposes but since Kansans therefore are required to take the standard state deduction, they end up paying higher state income tax.  Dave Trabert, president of Kansas Policy Institute (which also owns The Sentinel), says calling many of those people ‘wealthy’ is consciously misleading.

“A couple with a $300,000 mortgage will pay over $11,000 in mortgage interest and more than $4,000 in property tax. Just those two deductions would be enough to itemize under the old federal rules but now they’ll likely take the standard deduction. But since the state standard deduction for married couples is just $7,500 they’ll pay higher state income tax, because they can’t claim deductions above that amount.”

The main business component of the legislation would have prevented Kansas companies from being newly taxed on foreign earnings. That’s not giving those companies a ‘tax cut;’ it’s preventing them from being hit with a tax on income earned elsewhere and that they haven’t been paying in the past.

In her veto message, Kelly said House Bill 2033 would “decimate the state’s ability to pay our bills and invest in our people.” And later, “Just as Kansas begins to stabilize after years of senseless fiscal crisis, House Bill 2033 will create a $1 billion deficit within three years.”

Those statements went unchallenged by the Capital-Journal as well as reporters for the Wichita Eagle.  Reporters know the state is setting a new spending record next year with a 9 percent increase and should have disputed a claim about not being able to ‘invest’ in people. 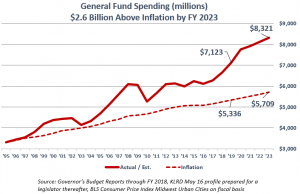 Allowing Kelly to say the tax legislation would create a $1 billion deficit but not explaining the whole budget picture is an even greater example of media deception.

Michael Austin, director of the Center for Entrepreneurial Government at Kansas Policy Institute, published a Kansas Legislative Research budget projection that says the state budget still has a $1.4 billion deficit over the next four years after the tax legislation was vetoed.

“Under this veto, Kansas is still running a deficit,” he said. “The record budget spending is what is plunging the state into a fiscal free fall, not a tax cut.” Austin says KLRD also produced an estimate putting the deficit at $1.7 billion if Kelly hadn’t vetoed the legislation.

Regular budget projections produced by KLRD ignore that state law requires a 7.5 percent ending balance (about $600 million), but legislators have seen the real numbers and know that another big tax increase is coming unless they reverse course and reduce spending.

Kelly vetoed a similar piece of legislation earlier in the session, but an override wasn’t attempted because the votes weren’t there. That legislation had a larger price tag, because it would have been retroactive. There’s a chance that the lower-cost HB 2033 could garner the votes to override.

Americans for Prosperity-Kansas is urging lawmakers to exercise that option when they return to Topeka on May 29.