Gov. Laura Kelly established the Governor’s Council on Tax Reform, a group that will study and make tax recommendations to state lawmakers. Kelly appointed 11 individuals who will serve for 18-months to develop a “fiscally responsible, fair and sustainable tax structure,” according to a press release from Kelly’s office.

“Governor Kelly has appointed people who will recommend what she wants–higher taxes to support even more government spending,” said Dave Trabert, president of the Kansas Policy Institute, which owns The Sentinel.

A majority of the appointees represent various forms of government or entities that profit from government spending, according to Trabert.

The council is comprised of ex-officio Kelly cabinet members, representatives from governmental lobbying organizations including the Kansas County Treasurers Association, the Kansas Association of School Boards, the Kansas Association of Counties, and the Kansas League of Municipalities, as well as four that Kelly’s press release says are from the “business, economic development or agricultural communities.” Those representatives include a former county administrator for Wyandotte County, a Sprint vice president, the CEO of Frahm Farmland, and Carl Brewer, a former Wichita mayor. Also included on the council are former state officials including Audrey Langworthy, a former state senator from Prairie Village, and John Wilson, the Kansas Action for Children vice president of advocacy, who served in the Kansas House.

A 2014 press release says, “The Securities and Exchange Commission today announced securities fraud charges against the state of Kansas,” for actions undertaken by the state when Duane Goossen worked in Sebelius-Parkinson administration.  Goossen also was named in the SEC document by position.

Morris, as Senate President, refused offers from the Kansas House to reduce the impact of former Gov. Sam Brownback’s now-defunct tax plan.  Brownback proposed a $350 million tax reduction over five years but the Morris-led Senate pushed the cost to $3.5 billion.

“While Kansas continues to recover from the tax experiment of the prior administration, there’s a need for tax reform designed with adequacy, equity, and stability in mind,” Kelly said in a press release.

Kelly said she selected Morris, in part, because he understands the importance of ensuring the tax code “supports public investment in areas such as education, public safety, and infrastructure.”

Tax revenue was $7.5 billion last year and set another record, but that’s still not enough to keep up with runaway spending.  Kansas Legislative Research predicts spending will exceed tax revenue this year and each of the following three years.  By FY 2023, spending will hit $8.3 billion and be $2.6 billion higher than inflation-adjusted levels since 1995. 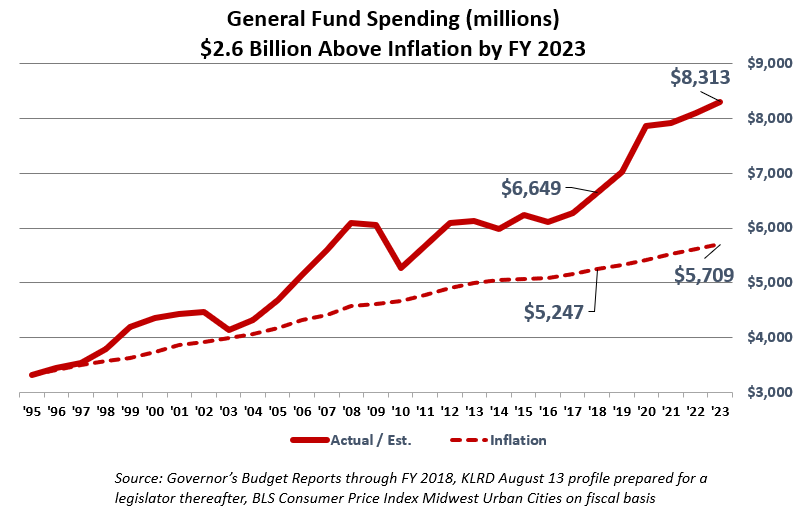 In her release, she recommends that Kansas rely on a “sensible balance of income, sales and property tax revenue.

The press release says the council will be charged with determining how much room will be available in future budget projections on tax relief.

Real tax relief – a net reduction in the overall tax burden – is unlikely to be on the table, according to Trabert. Kelly twice vetoed legislation to return the so-called federal tax reform windfall to Kansas taxpayers, depositing the tax savings into state coffers. And budget projections show the state is facing more than a $1 billion shortfall over the next four years.

“So instead of suggesting opportunities to cut taxes for everyone in Kansas, we can look forward to political justifications for higher taxes from Kelly’s commission,” Trabert said.