Earlier this month — and without fanfare — the Kansas Department of Health and Environment’s Health and Environmental Laboratories reduced the cycle threshold for its real-time COVID-19 test from 42 to 35 cycles.  (The screengrab below shows KDHE mistakenly dated the change January 2020, but the link address is dated 2021 and KDHE wasn’t running COVID tests a year ago.) 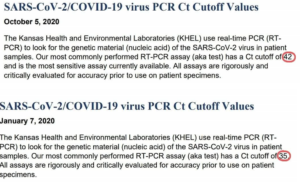 This comes after months of warnings by health professionals — including Dr. Anthony Fauci and the World Health Organization — that high cycle thresholds in the most commonly used tests were producing false positives.

The cycle threshold is — roughly — the number of times a bit of genetic matter must be copied by the testing equipment to determine how infectious a given individual is. The higher the cycle threshold needed to identify COVID, the less viral load a person has; some virologists say results above 35 cycles are “false positives” because they are only detecting dead nucleotides and are not contagious.

In October of 2020, KHEL said their most commonly-used test “has a Ct cutoff of 42 and is the most sensitive assay [test] currently available.”

On January 7, the Ct cutoff was changed to 35, and the last half of that sentence omitted.

The Sentinel reached out to KDHE spokeswoman Kristi Zears, to ask if private laboratories being used by local governments like Wyandotte County had also reduced their cycle threshold, but received no response.

Fauci has stated that the cycle threshold should be 34 or below.

The problem is, the WHO has now warned against over-sensitive tests, and recently issued guidance that “careful interpretation of weak positive results is needed (1). The cycle threshold (Ct) needed to detect virus is inversely proportional to the patient’s viral load. Where test results do not correspond with the clinical presentation, a new specimen should be taken and retested using the same or different NAT technology.”

While there is no proof that the lowered Ct has led to a sudden reduction in “cases” — and thanks to KDHE’s silence it is unclear if private labs have followed suit — it is notable that, while case-counts have actually been dropping since Thanksgiving, there has been a noticeable drop in average daily positive results since Jan. 7, from 2,752 on the 7th to 1,795 between the 19th and 20th of January.

KDHE doesn’t publish daily case updates; the daily numbers in the chart above represent the daily average between reporting points.

As national outlet PJ Media points out, the so-called “case” numbers should more accurately be called positive tests, and as PJ’s Stacey Lennox writes, “The New York Times and several experts admitted in late August that up to 90% of positive PCR tests were not indicative of the active illness that could be transmitted to others.”

As the Sentinel previously reported, Dr. Michael Mina, an assistant professor of epidemiology at both Harvard Medical School and the Harvard T.H. Chan School of Public Health, told Harvard Magazine that reporting people positive on tests with a high cycle threshold are “false positives.”

“Tests with thresholds so high may detect not just live virus but also genetic fragments, leftovers from infection that pose no particular risk,” Mina said. “Akin to finding a hair in a room long after a person has left.”

One maker of the COVID PCR test, Bioningentech, offers guidance quite similar to those in a New York Times article, which points to oversensitive tests nationwide.  Cycle thresholds between 12 and 36 are considered positive; results between 36 and 40 cycles are considered marginally positive, and anything over 40 cycles is considered negative.

Dr. Mina said he would set the figure at 30, or even less.

“Those changes would mean the amount of genetic material in a patient’s sample would have to be 100-fold to 1,000-fold that of the current standard for the test to return a positive result — at least, one worth acting on.”