(editor’s note: the story has been updated to include a quote from KDADS that was provided after publication)

The problems at long-term care facilities appear to be far deeper than being “encouraged” by the State of Kansas to accept COVID-positive residents, and state agencies refuse to provide straight answers to the Sentinel’s questions.

Kansas is in the top 10 for “deficiencies” at long-term care facilities, according to a 2019 U.S. Health and Human Services Inspector General’s report.

The report, which covers the years 2013-2017, has Kansas ranked 9th overall in total deficiencies and 20th in the number of site-surveys conducted by regulatory agencies.  Kansas is one of the ten states that accounted for half of the deficiencies identified. 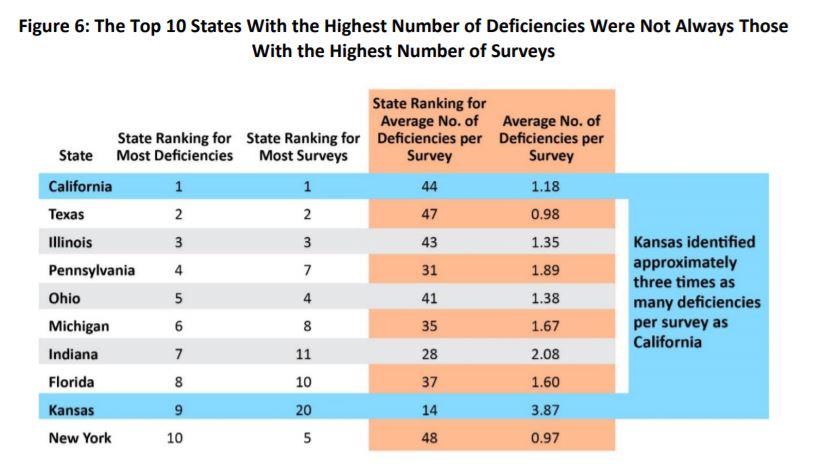 In absolute numbers, Kansas had 18,303 residents, on average, and of nearly 380 nursing homes licensed to operate in the state during the study years, 364 had deficiencies.

However, the percentage of violations in Kansas tells a different story, with 3.87 per survey, roughly two-and-a-half times the number of violations per-survey of the most-cited state California, and nearly double Indiana’s 2.08 per survey. In addition, Kansas has a repeat deficiency rate of 53%, yet bordering state Oklahoma’s rate was 40%, and Missouri, Nebraska, and Colorado did not exceed 35%.

None of the states surrounding Kansas made the top (worst) 10, and only Oklahoma and Missouri even cracked the top 20, ranking 11th and 12th respectively.

Indeed the pattern of violations and financial instability is so pervasive that in 2018, the State of Kansas placed 21 nursing homes in receivership — including one in Pittsburg. In 2019, 11 nursing homes in Kansas were placed on a secret list, eventually released by the U.S. Senate, of facilities in danger of losing certification from the Center for Medicare and Medicaid Services, which promulgates the federal regulations with which nursing homes must comply.

Another 2019 report from the Inspector General lists Kansas as one of six states in 2014, including North Carolina, Florida, Arizona, New York, Washington, and Nebraska, whose practice was to accept a facility’s “correction plan” as proof of “substantial compliance” for less serious deficiencies. 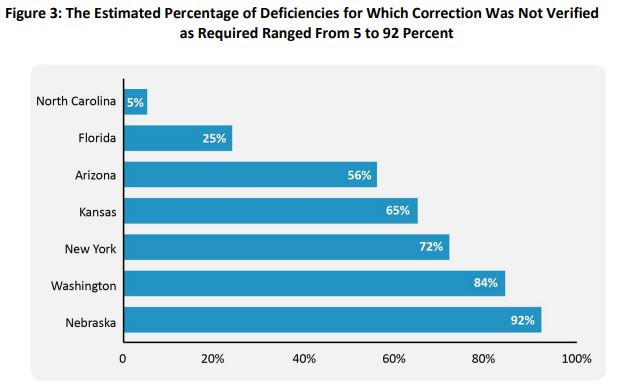 Put another way, if a “less serious” deficiency was cited — such as a fall hazard; which can prove serious indeed for an elderly patient — the Kansas Department of Aging and Disability services simply accepted the nursing home’s word that the problem had been corrected without further inspection 65 percent of the time.

The report notes that several of the state agencies agreed to correct this, but did not say which states.

While this troubling data predates the current KDADS administration, the Sentinel reached out to KDADS Spokeswoman Cara Sloan-Ramos, and Kansas Department of Health and Environment (which oversees KDADS) Spokeswoman Kristi Zears, asking if simply accepting a facility’s word for corrections was still policy despite clear federal guidance to the contrary, and if not, what had been done to correct the situation.

Zears responded that it was “not a KDHE question,” Sloan-Ramos did not respond by press time, but after publication, she sent the following:

“KDADS has met this standard set by CMS from 2018 to present. KDADS is required to do an on-site revisit for all substandard quality of care tags cited at an “F” or higher, all G, H, I, J, K & L citations, as well as any late adopter facilities identified in Group A or B when cited at F605, F744 & F758. KDADS worked with CMS contract consultants to refine process to ensure ongoing compliance.”

According to the study, the top three violations in Kansas are:

However, routine inspections of nursing homes have been suspended, although spot checks based on actual complaints continue.

As of June 3, there had been a total of 10,170 identified COVID cases in the state, including 731 of them at long-term care facilities; of the 222 total deaths, 117 of them were in nursing homes — more than outside the facilities — with a mortality rate of 16% for LTCF residents compared to 1.1% elsewhere in Kansas.

Moreover — despite guidance from the White House on May 11, three weeks ago,  that all residents and staff be tested — Kansas has yet to put a plan in place to do the testing.

“Currently we are assessing key areas of supply and lab capacity for testing and plan to have more comprehensive guidance available to providers and the general public next week,” Sloan-Ramos said. “KDADS is working with the three Nursing Facilities Associations, Leading Age Kansas, KACE and KHCA, to ensure our plan for re-opening nursing homes is comprehensive, informative and achievable for providers while still maintaining the utmost vigilance for the vulnerable population residing in our facilities.”

Indeed, the lack of testing and comprehensive infection control programs is troubling because less than three weeks ago, on May 11 — the same day the White House issued comprehensive testing guidance — a Johnson County nursing home was the site of a COVID cluster.

The Kansas City Star reported on May 21, that “a state report found violations at a Prairie Village nursing facility that put residents who lived in three wings of the property in ‘immediate jeopardy related to the spread of COVID-19.’

“Brighton Gardens, which has had 81 cases and 15 deaths from the coronavirus — the most for nursing facilities in Johnson County — was issued an ‘Immediate Jeopardy’ tag … which is the most severe citation, by KDADS.”

The tag describes a situation that, “has caused or is likely to cause serious injury, harm, impairment, or death to a resident,” according to CMS.

The tag was removed a few days later, after the facility addressed “concerns related to employee screening,” according to the Star.