Rep. Sharice Davids, D-Kansas, representing the state’s 3rd Congressional District, is running a TV ad claiming the Brownback tax relief plan “drained funding for the school system” in Kansas, but that’s not true.  And neither is her claim in an email sent by her campaign on Saturday, October 24 claiming that “Twenty three (sic) more people lost their lives to COVID-19 yesterday in our state.” 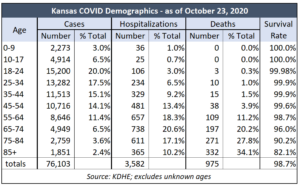 The survival rate in Kansas according to KDHE is 98.7% overall as of October 23.

The source for Davids’ school funding claim is a CNBC article from 2017.  The article made 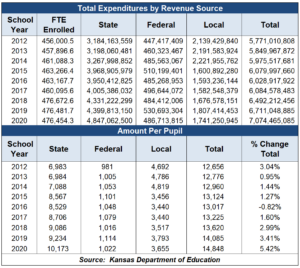 the claim, but like many media claims related to the Brownback tax plan, it wasn’t true.

The Kansas Department of Education database shows total funding for the 2012 school year was $5.771 billion, or $12,656 per student.  That was the year the tax relief plan was passed by the legislature, to be effective January 1, 2013.  Five years later, when the legislature retroactively reversed the tax relief plan, school funding was $6.085 billion in total and $13,225 per student.

The only decline during the period was less than 1% per student in 2016, when the legislature delayed a pension payment.

As documented in “What was Really the Matter with the Kansas Tax Plan” (a book published by the Sentinel’s owner, Kansans Policy Institute), much of what was written by local and national media about the tax plan was shaped to align with their editorial opposition to tax relief.  The ad approved by Sharice Davids cites a news story claiming that tax relief “wrecked the state budget” but that’s another false media narrative.

At the same time that Kansas had budget challenges, other states including North Carolina, Indiana, and Tennessee successfully cut taxes.  The difference in Kansas is that Governor Brownback, Democrats, and many Republicans increased spending and declined opportunities to eliminate some of the considerable waste in the state budget. 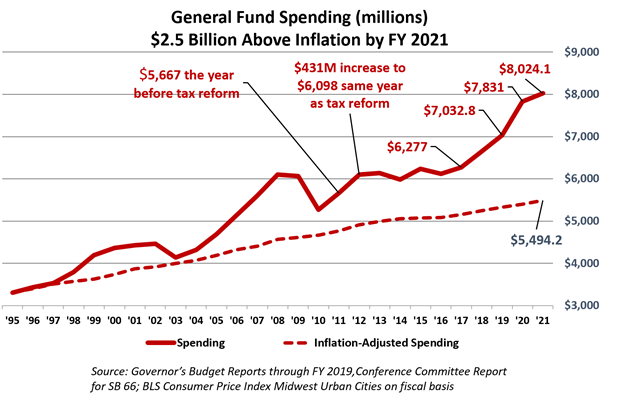 The Sentinel didn’t attempt to reach Rep. Davids for comment because she hasn’t responded to other efforts.