The authors conclude, “While small benefits cannot be excluded, we do not find significant benefits on case growth of more restrictive NPIs. Similar reductions in case growth may be achievable with less restrictive interventions.”

The potential harmful health and economic effects of NPIs were major influences for conducting the study.

“Because of the potential harmful health effects of mrNPI – including hunger, opioid-related overdoses, missed vaccinations4, increase in non-COVID diseases from missed health services, domestic abuse, mental health and suicidality, as well as a host of economic consequences with health implications – it is increasingly recognized that their postulated benefits deserve careful study. One approach to evaluating NPI benefits uses disease modeling approaches. One prominent modeling analysis estimated that, across Europe, mrNPIs accounted for 81% of the reduction in the effective reproduction number (Rt), a measure of disease transmission. However, in the absence of empirical assessment of the policies, their effects on reduced transmission are assumed rather than assessed. That analysis attributes nearly all the reduction in transmission to the last intervention, whichever intervention happened to be last, complete lockdowns in France, or banning of public events in Sweden.”

States not locked-down have fewer deaths per capita

First, there is a wide disparity of cases and deaths per capita among the 43 states whose governors imposed statewide lockdowns.  Hawaii has the lowest number of cases per million of population (17,291) as of January 18 and Tennessee has the most (100,708); the average is 72,073. 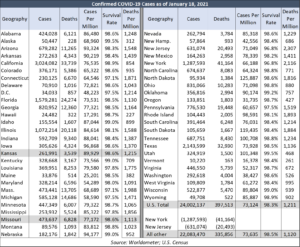 Less job loss in states not locked down

Along with fewer deaths per capita, the states not locked down have less job loss.  The November jobs data from the Bureau of Labor Statistics shows they lost 3.2% of private-sector jobs compared to the year prior, but the lockdown state lost 6.1% of their jobs.  The states allowed to stay open also lost fewer state government jobs (-2.5% vs. -5.8%). 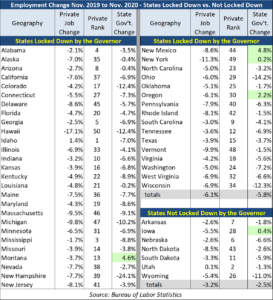