Kansas Department of Health and Environment (KDHE) Secretary Dr. Lee Norman told the Topeka Capitol-Journal that legislative efforts to curb the governor’s emergency response authority will likely lead to a summer COVID surge, but many facts, fortunately, refute his prediction.

Norman said he would welcome the opportunity to address House and Senate members about COVID-19.

“I’d be happy to do that,” he told The Topeka Capital-Journal’s editorial advisory board. “I could do that extemporaneously almost and put up a few relevant graphs and end up with a very non-subtle message that we need help, not interference.”

“There’s been attempts to diminish the governor’s ability to respond in the heat of an emergency,” he said. “For me, that’s like going to a house fire and crimping the hoses so the firemen can’t put out the fire. I do not appreciate that.”

If Dr. Norman doesn’t appreciate that a large, bipartisan majority of legislators wanted something less than monarchial authority over emergency responses on behalf of their constituents, one must wonder what he thinks of Governor Kelly handing everything over to local officials.  She could have maintained statewide control if she hadn’t vetoed the legislation providing some legislative oversight. 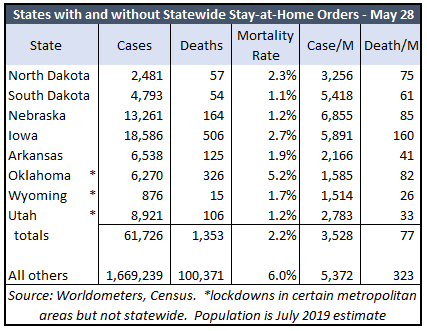 If Dr. Norman does visit with legislators, they could put up a few relevant graphs refuting the notion that statewide mandates are necessary.

The adjacent table, for example, shows the states that were shut down by their governors have far worse COVID outcomes.  They have almost three times the mortality rate (6% vs. 2.2%) and the number of deaths per million of population is more than four times greater (323 vs. 77).  The lockdown states also have 50% more cases per million (5,372 vs. 3,528).

Norman said mandated state or county orders are “a useful tool in bringing a population into adherence with best practices.”  Perhaps to justify his opinion, Dr. Norman told the Capitol-Journal that only five states have a lower fatality rate from COVID-19 than Kansas.  Actually, it’s six states as of yesterday, according to Worldometers, that are below the 2.3% Kansas mortality rate. But here’s another fact that undermines the notion that statewide mandates are necessary.

Five of those six states – South Dakota, Utah, Nebraska, Wyoming, and Arkansas – weren’t under statewide shutdown orders.  Another state not shut down, North Dakota, is tied with Kansas. 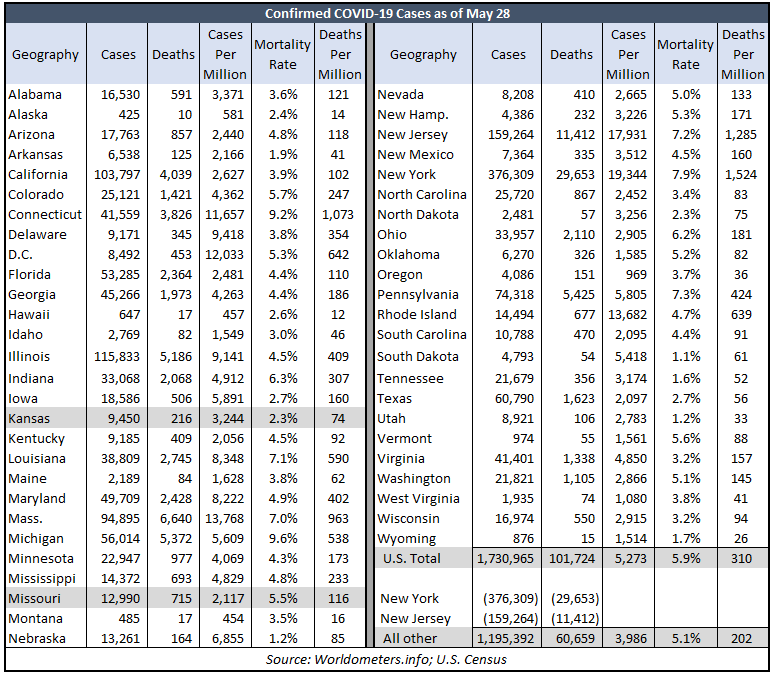 The eight states not shut down by their governors also had much less job loss, as we reported last week.  They collectively lost 9.8% of their private-sector jobs, but the states shut down lost 15.4%.

Governor Kelly Kelly ordered the Legislature to come back next Wednesday in special session to, as the Capital-Journal says, ‘develop a bipartisan, compromise bill to guide state government through pandemic emergencies.’  For the record, the bill Governor Kelly vetoed was a compromise bill with a flavor of bipartisanship.  Some of the liability protections desired by business owners weren’t included because it was known the governor would veto the bill if they were included, for example.  Some legislators, on behalf of their constituents, wanted much more legislative oversight on spending and emergency actions, also.

No Democrats voted for any restrictions on the governor’s monarchial authority (and likely wouldn’t compromise on that) but there were several fairly-to-very moderate Republicans who did vote for Senate Substitute for House Bill 2054.