Parents across Kansas are furious that schools are teaching children things like ‘white people are inherently racist and oppress students of color.’  Parents and teachers present school board members with documentation and first-hand experience of critical race theory in schools.  But the Kansas City Star decided early on that CRT is not in Kansas schools and it continues to ignore hard evidence that contradicts that belief.

The Star most recently used a serious legislative discussion of mental health issues in schools to deny the proven existence of the tenets of critical race theory in Kansas schools.  Rep. Kristey Williams (R-Augusta) documented multiple examples of CRT in schools in her testimony before the Special Committee on Kansas Mental Health Modernization and Reform.  But without even attempting to refute her evidence, Star reporter Katie Bernard simply declares, “…there is no evidence that it is being taught.”

What, then, is this Blue Valley teacher training slide, Ms. Bernard?  It says “people who are white, male, heterosexual, upper-middle-class, athletic, able-bodied, or neurotypical are in the 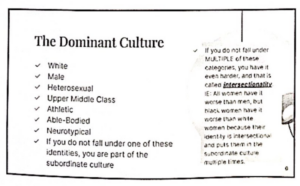 Dominant Culture.  People who do not fall under one of those identities are part of the subordinate culture.”

The Star perpetuates the lie by falsely attacking its political enemies, saying, “a network of conservative think tanks, activists and wealthy donors have seized on CRT and depicted it as an attempt by liberal educators to indoctrinate schoolchildren in an ideology of hatred for the U.S.”

Sure, some groups are writing about what schools are doing under the guise of diversity, but the impetus for that reporting is widespread parental fury and documented evidence.  The attempt by schools and media to cover up the brainwashing is the conspiracy here.

To wit, the Topeka Capital-Journal also ignores evidence of CRT in Kansas schools and denies that it is being taught.  And like Bernard, reporter Andrew Bahl tries to blame conservatives and functions as a spokesperson for school officials.  The Wichita Eagle, which like the Kansas City Star is controlled by Chatham Asset Management, also published the bogus KC Star claims.

The committee hearing was on mental health, but the Star only referenced the issue in passing as an excuse to reinforce its own brand of indoctrination.

Rep. Williams’ written testimony referenced a Scientific American article that cites shame-proneness and its connectivity to low self-esteem and depression. The depression and shame link was “examined in 108 studies involving more than 22,000 subjects which showed a clear connection.”

“Imagine being age 11 and, whether directly or whether implied, are told hey, your mom, your dad are systemically broken. Your grandma or great or great-great grandma were slave owners… because of that I can’t get a job…”

Teaching children that people of one race are to blame for the woes of other people is a disservice to people of all races, but that is the premise of critical race theory, and it is extremely damaging to children.

The Scientific American article says, “Shame makes us direct our focus inward and view our entire self in a negative light.” It also adds that “women are quicker to feel humiliated than men, and adolescents feel shame more intensely than adults do. As a result, women and adolescents are more susceptible to the negative effects of shame, such as low self-esteem and depression.”

The Kansas City Star insists that schools are merely teaching students about diversity and doesn’t deny the existence of the CRT evidence; it’s just harmless diversity training.  So the Star is apparently OK with things like this:

— “Teaching…is actually redistributing privilege in the service of social justice.”

— A Deep Equity instructor reflects on what it means “to be white in a country with such        a difficult history on race, and my (white) group has been the dominant, oppressive            group in many ways.”

— “My teenage son is deeply depressed because he is white.  What do I do?”

— That same instructor, who also created Deep Equity, says part of the work on “social           dominance and social justice” is to ask “elementary, middle school, or high school               (students)…how they are experiencing systems of privilege and preference reinforced         by power that favors certain groups over others in their school settings and community       settings.”

The Star and schools can pretend that this indoctrination is just harmless diversity training, but a growing number of parents say schools should not be pushing this ideology on their kids.  Parents are demanding that legislators give them a choice in what their children are taught.  If they don’t do so in the coming legislative session, they will likely feel parents’ wrath in the 2022 elections.