In Hans Christian Andersen’s The Emperor’s New Clothes, two swindlers arrive at the capital city of an emperor who spends lavishly on clothing at the expense of everything else.  Posing as weavers, they offer to supply him with magnificent clothes that are invisible to those who are stupid or incompetent.

The Kansas version of Andersen’s tale is the Kansas Association of School Board’s preposterous claim that student achievement in the Sunflower State is among the ten best in the nation.  Posing as responsible educators, KASB officials consciously deceive unsuspecting school board members, legislators, and parents with breathtaking proclamations of magnificent achievement that result from lavish spending.  And those who don’t believe their astonishing discovery are branded as anti-public-education kid-haters.

The KASB report is by no means an isolated incident; it is symptomatic of disregard for academic preparation throughout the public education system.

By every measure of academic preparation, Kansas is below average in a country that doesn’t perform well. 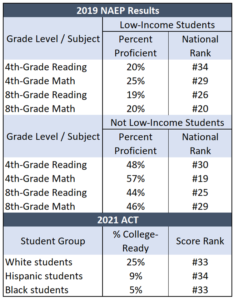 The most recent results from the National Assessment of Educational Progress (NAEP) show the best ranking for Kansas is #19 in fourth-grade math for students who are not low-income.  And having only 57% of those students proficient is not a chest-thumping outcome.

The rankings on the other seven measurements range from the mid-20s to the low-30s.  Less than a quarter of low-income students are proficient, and less than half of their more affluent peers are proficient.

State assessment results show Kansas has more high school students below grade level than proficient, which is reflected in the ACT results.  Just one in five Kansas graduates is college-ready in English, Reading, Math, and Science, with rampant race-based educational discrimination.  A quarter of White students are college-ready, but only 9% of Hispanic students and just 5% of Black students.  ACT rankings are all in the low-30s.

KASB methodology is deceptive by design

KASB first published its specious report in 2016, when the Kansas Department of Education began de-emphasizing academic preparation with its “Kansans Can” initiative.  The ‘can’ part is farcical shorthand for “Kansans can lead the world in the success of every student.”  Student achievement has steadily declined between 2016 and 2019, and it is even worse now.  Yet the state board of education refuses to say how many years it will take to get kids to grade level, let alone ‘lead the world.’

The methodology is designed to produce its desired outcome.  The KASB ‘formula’ counts things that are not measures of academic preparation, like high school graduation and drop-out rates, and post-secondary education, which collectively account for two-thirds of the overall ranking.

As the late great Walter Williams said, “It’s grossly dishonest for the education establishment and politicians to boast about unprecedented graduation rates when the high school diplomas, for the most part, do not represent academic achievement.  At best, they certify attendance.”

The Kansas Department of Education gave out ninety-one Gold and Silver Awards last year to districts with high school graduation rates at or above 93%.  But how many school districts do you think received Gold or Silver Awards for Academic Preparedness?  Just one – on the military base at Fort Leavenworth.

Education officials do students no favors by giving them diplomas when they cannot do math or read at grade level.  But like the KASB report and the Kansans Can campaign, the purpose is not to educate students but to make the public education system look good.

Local school board members collectively divert about $5 million of what should be classroom spending to fund the Kansas Association of School Boards.  But Topeka insiders know that KASB mostly represents the interests of superintendents and the Department of Education.

This latest KASB report is another reminder that improving student achievement is a distant thought in the Kansas public education system.  State and local education officials are on record consciously deceiving legislators about achievement, ignoring state laws designed to improve outcomes for at-risk students and other actions that work against students’ needs.  Bottom line: the Kansas public education system will not resolve low achievement if left to its own devices.  Legislators must intervene with choice, transparency, and accountability measures. 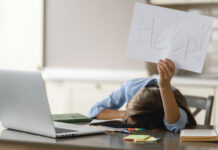 KS education establishment out of touch with parents, student needs