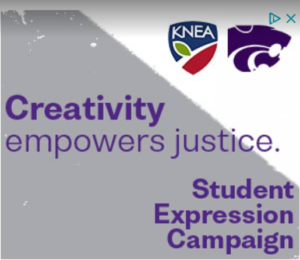 The Sentinel reached out to K-State asking a few simple questions:

K-State acknowledged our email, but would not answer any of the questions.

The term “social justice” has become controversial in recent years as it has been used for everything from teaching the controversial Critical Race Theory (often under the guise of Diversity, Equity, and Inclusion), to promulgating “national” sex education “standards” which use the word “girl” not at all, and “boy” only in the context of “princess boys.”

Moreover, it has often been used to push for equity of outcomes rather than equality of opportunity.

The KNEA Just Imagine Justice website includes a number of resources for teachers who are concerned about “social justice.”

These include links to “transstudent.org,” One Archives’ “LGBTQ History Lesson Plans,” the Gay, Lesbian and Straight Education Network, learningforjustice.org, welcomingschools.org (an affiliate of the Human Rights Campain Foundation), a University of Southern California “Diversity Toolkit, which is explicitly about identity politics — as well as the NEA’s Center for Social Justice and NEA EdJustice.

We didn’t find any resources that suggest that diversity of thought is important, as all of KNEA’s resources are from extremely left-leaning organizations.

The Sentinel reported earlier this year that critical race theory is the top priority of the National Education Association, to which KNEA belongs.

Schools across Kansas have been caught teaching the controversial theories behind CRT, although repeatedly denying they are teaching it.

However, many schools are teaching Diversity, Equity, and Inclusion — which uses much the same language and concepts as CRT — and “social justice.”

Earlier this year, Kansas Education Commissioner Randy Watson told the State Board of Education that Critical Race Theory is not being taught in Kansas schools. However, an email exchange obtained by The Sentinel showed CRT is being used in the Olathe school district.

On July 13, Watson told KSBE members that CRT is not part of Kansas curriculum standards.

“It has never, ever included critical race theory, nor does it today,” he said.

While it may be true that CRT is not part of the “standards,” it does not mean the controversial theory isn’t being taught.

Indeed, The Sentinel found that not just Olathe, but other districts across the state are pushing critical race theory, including Hiawatha, Shawnee Mission, Blue Valley, and Wichita.

Education officials dismiss CRT as merely “a body of legal scholarship and an academic movement of civil-rights scholars and activists in the United States that seeks to critically examine U.S. law as it intersects with issues of race in the U.S. and to challenge mainstream approaches to racial justice,” and “examines social, cultural, and legal issues primarily as they relate to race and racism in the United States.”

Critics, however, point out that “critical race theory lacks supporting evidence, relies on an implausible belief that reality is socially constructed, rejects evidence in favor of storytelling, rejects truth and merit as expressions of political dominance, and rejects the rule of law.”

In 1997, 7th Circuit Court of Appeals Judge Richard Posner argued  that critical race theory “turns its back on the Western tradition of rational inquiry, forswearing analysis for narrative”, and that “by repudiating reasoned argumentation, [critical race theorists] reinforce stereotypes about the intellectual capacities of nonwhites.”

Moreover, while teaching students that race and racism infuse every aspect of their lives, it also argues that attempting to treat others “based on the content of their character, rather than the color of their skin” — being “colorblind” in other words — is also racist: If you’re white.