A bad June jobs report would be front-page news if Kansas had a Republican governor, but mainstream media apparently has no interest in reporting economic shortfalls under Laura Kelly’s reign.

Results released last week by the Kansas Department of Labor and the Bureau of Labor Statistics show there were 65,500 fewer private-sector workers in June compared to a year ago. But Governor Kelly is still protecting state employees; there were only 600 fewer state workers in June.

Every state lost private-sector jobs this year, but some states that weren’t shut down by their governor are faring better than Kansas.

Private employment was down 5.6% in Kansas, but four states that weren’t closed by their 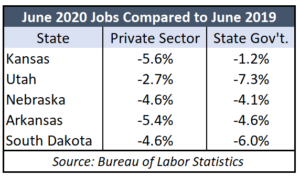 The governors of those states pared-back state employment much more, however, and they’ll be better able to deal with budget shortfalls as a result.  Utah Governor Gary Herbert sliced the state workforce by 7.3%.  Kristi Noam, South Dakota’s governor, cut state jobs by 6%, Asa Hutchinson reduced state jobs by 4.6% in Arkansas, and Nebraska Governor Pete Ricketts lopped 4.1% off the state workforce.  In Kansas, state jobs were only down 1.2%.

Kansas was behind pre-COVID

The private-sector job loss is especially worrisome for Kansas because the state wasn’t in good shape before COVID hit.

Now Kansans face another potential tax increase, as the state has a $1.5 billion budget deficit for the fiscal year starting next July and Governor Kelly is not reducing the state’s operating costs.