In response to our Kansas Open Records Act, the Kansas Department of Health and Environment says it doesn’t know the number of Kansas deaths from all causes his year.

Email correspondence from the agency KORA officer says, “KDHE does not possess records responsive to this request in existence.  KDHE would have to create multiple records to respond to your request.  As KORA does not require a public agency to create a record in order to respond to requests for information, your request will be closed.”

State law allows government entities to deny an Open Records request if the information isn’t already assembled, so if KDHE is being honest, one of the following circumstances must be true.  (1) The information only exists across multiple records (like, by county) and KDHE is using the KORA loophole so they don’t have to add up the pieces and share total deaths with the public. Or (2), KDHE doesn’t have any record of how many people have died this year.

Both circumstances would indicate a high degree of incompetence, along with disdain for the general citizenry.

How can the state health agency honestly evaluate the impact of COVID without knowing how many deaths attributed to it might really be caused by other severe underlying conditions?  It would be important to know whether the numbers of deaths attributed to other causes are up or down, particularly heart disease, diabetes, pneumonia, and other respiratory illnesses.  The death of every person is to be mourned but understanding the true ‘excess’ number of deaths from COVID is important for shaping policy.

Kansans also deserve to know if deaths from suicide have increased, particularly teenagers who are distraught over school closures.  KDHE also rejected our request for suicide death totals, claiming to not know the number. 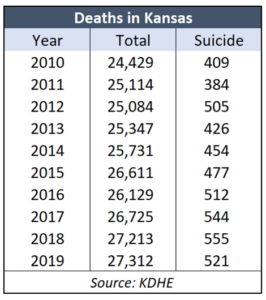 KDHE tracks the data on Kansas deaths and publishes annual reports, breaking down the statistics by age, cause of death, and by county.  Last year, there were 27,312 total deaths in Kansas, including 521 suicides.  Heart disease was the leading cause; the 6,058 deaths reported was a 5.5% increase over 2018.

To be clear, raising these issues should not be construed as minimizing the seriousness of COVID nor the tragedy of any death.  But given the severe economic, educational, and emotional consequences of government efforts to mitigate the spread of COVID, it’s unconscionable to not examine and make this information publicly available.

Many other unanswered questions

This is just the latest in a long history of KDHE and the Kelly Administration hiding information, misrepresenting data, and other transparency transgressions.

Most labs are using cycle thresholds on COVID tests that are likely identifying some positive results that aren’t contagious but KDHE won’t ask labs for the data.

Almost half of all deaths attributed to COVID occurred in nursing homes, and administrators of some facilities told legislators they weren’t getting personal protective equipment and other supplies they need from KDHE.  Legislators requested PPE distribution information from KDHE but Gov. Laura Kelly ordered them to ignore the request.  Some of that onus certainly falls on nursing homes but given that state government purchased PPE for distribution and many of the most vulnerable reside in nursing homes, the state should be taking steps to ensure safety.

Another Open Records request discovered that KDHE purchased COVID test kits manufactured in China through an unregistered Kansas company; KDHE refuses to answer questions about the purchase and won’t even say if the tests were FDA-approved.

KDHE and the governor aren’t the only ones covering up information; major newspapers and TV stations are aware of much of this but won’t report it.

Governor Kelly, her agencies, and their friends in media aren’t going to change their irresponsible behavior, so Kansans need to pressure legislators to remove loopholes in the Open Records laws and add some attention-getting consequences for failure to comply.