Kansas Governor Laura Kelly announced budget changes last week that she said would close a $653 million deficit in the 2021 fiscal year starting July 1. The Sentinel reported that most of those changes merely pushed spending and debt payments to the following year, and now we know the deficit balloons to $1.5 billion in fiscal year 2022.  And by not cutting spending now, the governor and legislators could be setting Kansans up for an enormous tax increase.

The table below provided by Kansas Legislative Research via email shows the State General Fund is expected to finish the fiscal year ending June 30 with $89 million left in the bank and a zero ending balance next year.  But FY 20200 will see tax revenue decline by about $650 million, spending will increase by $567 million, and one-time deferrals of debt payments totaling $267 million won’t be there to artificially increase revenue. 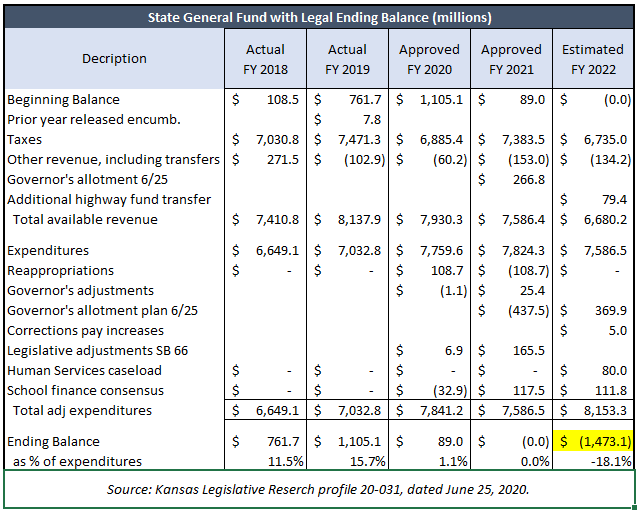 The real deficit is over $2 billion

As bad as a $1.5 billion deficit sounds, the real deficit is a little over $2 billion.  KLRD profiles don’t take the statutorily-required 7.5% ending balance into account, as legislators over the years have routinely ignored the law requiring the state to have 7.5% of expenditures left in reserve at the end of each fiscal year.

Maintaining a legally-balanced budget would require $499 million in additional changes this year, $70 million next year, and $1.5 billion would still be required in FY 2022 to finish each year with 7.5% in reserve. 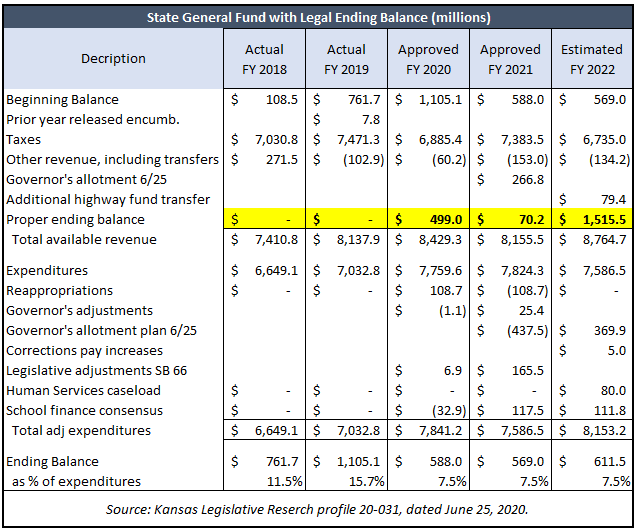 Democrats and Republicans alike have done so because it allows them to spend more without having to make tough decisions about responsibly using taxpayer money.  Then, when recessions hit and the demand for social services rises, governors and legislators resort to accounting gimmicks or draconian spending cuts because the state has no rainy day fund to deal with it.

“With Kansas families and businesses cutting back due to COVID-19 and government lockdowns, it is truly unfair Gov.Kelly doesn’t believe state government should share in the austerity. Kansans need leadership now more than ever from their elected officials. The Governor’s response to the impending $1.5 billion shortfall puts short-term spending ahead of the state’s long-term fiscal health. In other words, her refusal for structural budget balance may lead to a new record in the largest tax increase in state history.”

Austin believes legislators and the governor should immediately begin eliminating unnecessary spending from the budget, or they will be setting Kansans up for a huge tax increase.