The Johnson County Board of Commissioners arguably made a political decision to affirm Governor Kelly’s statewide mask mandate, even though local authorities can override such an order under state law.  The vote was 4-2 in favor, with Commissioner Michael Ashcraft abstaining.  Commissioners Mike Brown and Steve Klika opposed the mandate, with Commissioners Ed Eilert, Becky Fast, Jim Allen, and Janeé Hanzlick approving it.

Kansas Attorney General Derek Schmidt said yesterday that said Thursday Kansans cannot be arrested or detained for violating the governor’s order.  According to Schmidt, amendments to the Kansas Emergency Management Act adopted by the Kansas Legislature on June 4, and signed into law by the governor on June 8, included changing the violation of an emergency order issued by the governor from a Class A misdemeanor to a civil violation, which may be enforced by a lawsuit filed by the county or district attorney.

Several factors indicate the political nature of those supporting the mandate.  Each commissioner said their votes were guided by science, data, and the recommendations of the medical community.  But they were also presented with medical testimony refuting the effectiveness of masks.  No data was presented differentiating new cases between asymptomatic, mild, or severe cases, and county officials may not even have that information.  There is data, however, showing large case increases in late April and early May didn’t lead to an uptick in deaths.

Governor Kelly’s order says “recent weeks have seen the numbers of COVID-19 cases, hospitalizations, and deaths spike in Kansas,” but one of those claims is refuted by data from the Kansas Department of Health and Environment and another is unproven.   The chart below shows cases have increased, but the number of deaths in the last three weeks is each lower than the previous three weeks.  The mortality rate is also trending down and set a new record of just 1.9% on June 29.

KDHE doesn’t publish historic data on hospitalizations, and they haven’t provided that information in the Sentinel’s Open Records request. 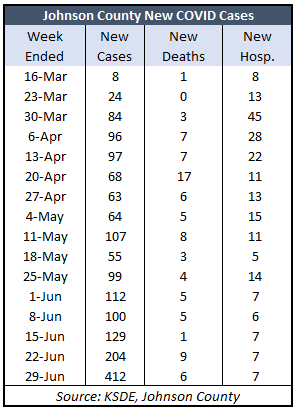 However, in Johnson County, hospitalizations are definitely not increasing.  New hospitalizations have been at just 6 or 7 per week since the beginning of June, even though the number of new cases grew significantly in the last two weeks.

There was an increase in the number of deaths, with 15 over the last two weeks compared to 6 in the previous two weeks, but Commissioner Steve Klika disclosed some startling new information today’s hearing about COVID deaths in the county.

“All 88 (deaths) were in long care assisted (living) facilities or they had other complications.”

Commissioner Brown questioned how enforcement would be handled, and Eilert relayed his conversation with the District Attorney, indicating there would be no legal enforcement.

“He said it would be ‘education, education, and information.’

Kevin Gunkel, with the City of Olathe prosecutor’s office, told the Sentinel there would be no enforcement in Olathe.

“It is not a city ordinance violation so there is no enforcement mechanism for the city to cite anybody that’s not wearing a mask.”

The Kansas City Star reports that about two-thirds of residents who addressed the commission opposed the mandate.

Commissioner Brown also expressed frustration with the mandate and the process.

“Nothing about how the governor has handled this is good government. She has very much turned face masks into a political statement.  This is failed leadership on a grand scale and it is inexcusable.

Brown also said the mask mandate is a backdoor way of shutting down Johnson County.

Commissioner Klika joined Brown and the citizens speaking against the mandate, expressing concerns that the county has been making decisions on fear rather than hard data.

“It certainly is interesting that Governor Kelly closed churches and restricted religious freedom the week of Easter, and now her mask order goes into effect the day before we celebrate America’s freedom on July 4.  That’s shameful.”