The COVID mortality rate in Kansas fell to a record-low 1.9% statewide, and the rate outside of state-identified clusters also set a new low of 0.9% on Monday.  On the same day, Governor Laura Kelly imposed a mandatory mask order effective Friday, July 3.

Kelly cited a jump in the number of new cases over the weekend in ordering Kansans to wear masks when out in public, but neither she nor the Kansas Department of Health and Environment released any details about the nature of those cases.  Is the increase coming from additional testing?  Are the majority of new cases asymptomatic?  They aren’t saying.

We do know, however, that the COVID mortality rate is trending down, falling from 5% on April 20 to 1.9% on June 29.  We also know that the mortality rate was declining in late April and early May when the number of new weekly cases was on the rise.

Kelly says she expects pushback on her latest statewide, one-size-fits-none mandate, and additional data indicates the basis for resistance.

More than half of the new cases reported last week were in the three most populous counties of Johnson, Sedgwick, and Wyandotte. But two of those counties are still far below the state average COVID infection rate of 0.5% (half of one percent).  The infection rate in Johnson County and Sedgwick County is only about a quarter of one percent (0.29% and 0.25%, respectively).  The rate in Wyandotte County is 1.39% but media reports indicate a 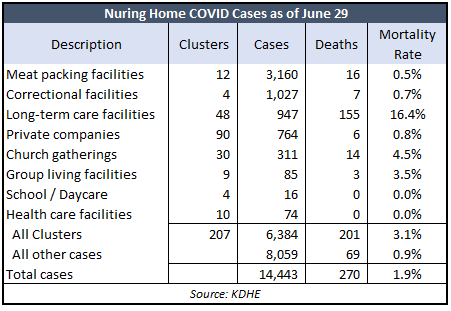 good portion of the county’s cases are isolated in nursing homes and long term care facilities.

Nursing homes and other clusters identified by KDHE account for 44% of all cases and an astounding 74% of all COVID deaths in Kansas.

In fact, there are only 69 deaths and 8,059 cases reported outside of the clusters, producing a COVID mortality rate of just 0.9%.

The Sentinel requested historic county-level data on COVID hospitalizations, ICU admissions, and deaths but KDHE is slow-walking the response through an Open Records request.

Governor Kelly says masks “are the best defense to keep Kansans at work,” but again, the data says otherwise.  In May, there are almost 107,000 fewer private-sector jobs in Kansas compared to the previous year, while the number of state government workers only declined by 200.