The International Association of Assessing Officers’ (IAAO) board of directors is seeking to redefine the meaning of “fee simple” according to a top commercial real estate attorney, Linda Terrill. In early August, the organization for property appraisers unanimously approved and released a white paper, “Setting the Record Straight on Fee Simple.”

In layman’s terms, “fee simple” values real estate properties based on sales where only the land and building sold and excludes investment-type sales where the buyer is also buying an income stream by buying the land, building, and a lease.

“Our state requires fee simple assessments, and our court has defined what that means,” Terrill says.

White paper authors, however, assert that there are issues arising from whether the term requires properties to be valued as if they’re vacant or whether the term should include market rent.

According to Terrill, the paper is attempting to go around the legislative and legal process to redefine the way commercial properties are assessed for taxation purposes.

“It’s the proverbial burr under my saddle. If they don’t like the law, they should go to where the law is made — the legislature– and take their chances,” Terrill says.

David Harper, Kansas’s Property Valuation Director, and Greg McHenry, Riley County appraiser, sit on the board of the IAAO, which unanimously approved the white paper.  Neither has responded to requests to be interviewed for this story.

In his role as property valuations director, Harper is responsible for issuing guidance to county property assessors throughout the state. According to Terrill, he should immediately issue a directive informing county appraisers that the IAAO white paper’s definition is contrary to state law.

The white paper is the latest salvo in an ongoing battle between big box retail stores and county property appraisers. Known colloquially as the “dark store controversy,” Johnson County is ground-zero for the debate, and Terrill is the lead attorney for a number of big-box retailers who are fighting the county over their property tax valuations.

The county changed its assessment methodology for commercial retailers in 2016, causing a dramatic spike in retail valuations, and therefore property tax bills, for big-box retailers. Rather than assessing the value of the land and the big box retail building atop it, assessors included intangible values based on lease agreements and the business in the building in their valuations. 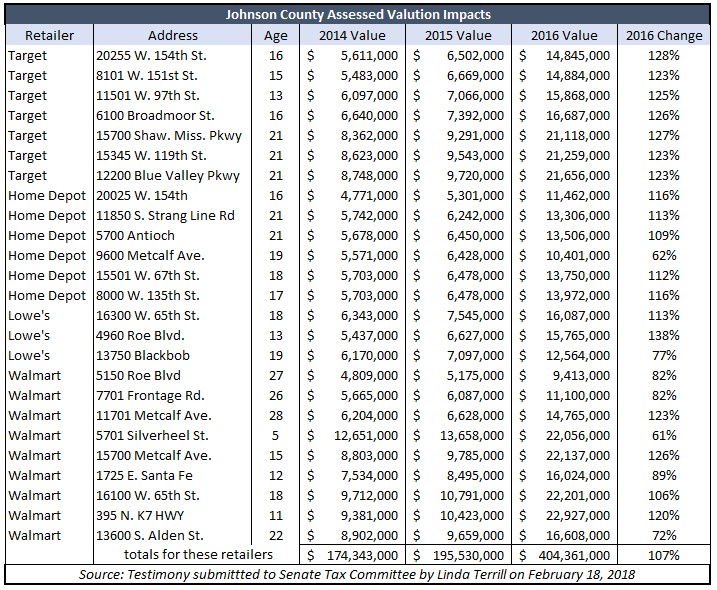 So far, the retailers are winning the argument that county appraisers are not following the law, having won every appeal filed in Kansas. Terrill explains the change this way: The value of your current home doesn’t change if you win the lottery or lose your job.

‘Dark Store Theory’ is a phrase coined by county appraisers, referring to setting commercial property values based on the building and land.  Ironically, that’s the way big-box retailers have been valued all along.  Now the county also wants to tax intangible value attributable to a lease in place and business value. In other words, Johnson County officials applied an ominous-sounding label to generally accepted appraisal practices to provide cover for what they were doing.  They want residents to believe retailers are asking for special treatment with ‘tax reductions;’ in reality, those retailers are trying to hold county appraisers to existing law and appealing what they believe to be large, improper tax increases.

Terrill recently told the Kansas City Star what appraisers are trying to do, saying, “If you win the lottery on Monday, your house isn’t suddenly worth more on Tuesday,” Terrill said. “And if you file bankruptcy on Wednesday, your house is still worth exactly the same thing.”

The proper way to redefine the assessment methodology would be to go to various state capitols and seek legislative change, Terrill says. In Kansas, the change might require a constitutional amendment and it would mean that different types of properties were assessed using different methods.

“Legislators would shut them down in a heartbeat. Instead, they have cleverly said, we need to close the dark store loophole. Nobody likes loopholes and nobody likes dark stores,” Terrill says. “I give them an A-plus for the PR campaign they’ve developed. It is brilliant.”

However, she says, the timing is really bad for retailers, who are in the process of attempting to right-size their storefronts in the face of booming internet sales.

“I give (assessors) an ‘F’ in timing. Retailers are getting hit from all sides,” Terrill says.

However, Alan Cobb, president of the Kansas Chamber, says the appropriate way to go about that is through the legislature.

“Don’t make it up,” he told Republicans at a luncheon in Johnson County Tuesday.  If local government wants to do this they need to be honest and advocate a change in the law.”