One Gardner-Edgerton Schoolboard member has made the claim on social media that the Kansas Legislature has made it impossible to use remote learning this school year. 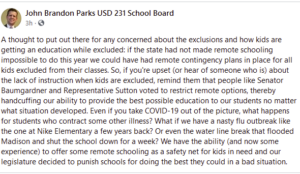 John Brandon Parks, who is running for reelection, said on his campaign page: “If the state had not made remote schooling impossible to do this year we could have had remote contingency plans in place for all kids excluded from their classes.”

By “excluded” Parks presumably means “students quarantined for testing positive — or for incidental contact with someone who has, or might have, tested positive — for COVID-19,” and often sent home under bogus “quarantine orders.”

He further states anyone who is “upset (or hear of someone who is) about the lack of instruction when kids are excluded, remind them that people like Senator (Molly) Baumgardner and Representative William Sutton voted to restrict remote options, thereby handcuffing our ability to provide the best possible education to our students no matter what situation developed.”

Sutton (R-Gardner), in an email statement, noted that the legislature got involved with the issue specifically because some districts — such as Gardner-Edgerton USD 231 — refused to return to in-person learning despite even the Centers for Disease Control saying as early as May 2020 that in-person learning was safe more than a year ago.

“We had parent after parent testifying in committee (yes, many were from Gardner), about the ineffectiveness of the remote learning being offered,” Sutton said. “We offered a financial incentive for school districts to find ways to keep kids in school, by saying that for students who were educated remotely over 40 hours during the school year, the school district would receive funding as if that student were a remote learner.”

Indeed, while the total per-pupil state aid spending will likely exceed $10,000 per student this year — for students enrolled for in-person learning — the school funding bill reduced that to $5,000 for any student placed in remote learning for more than 40 hours.

Parks noted that COVID-19 is not the only reason why a school might have to move to remote learning.

“Even if you take COVID-19 out of the picture, what happens for students who contract some other illness? What if we have a nasty flu outbreak like the one at Nike Elementary a few years back? Or even the water line break that flooded Madison and shut the school down for a week?” he said in the post. “We have the ability (and now some experience) to offer some remote schooling as a safety net for kids in need and our legislature decided to punish schools for doing the best they could in a bad situation.”

Again, Parks is not giving an accurate portrayal of the law.  The State Board of Education can issue waivers if a student “cannot reasonably attend in person due to illness, injury, or other extraordinary circumstance” or in the event of a disaster or severe property damage, which would include a water main break.

More to the point, experts agree that in-person learning is the best option for children and that the effects of school lockdowns can be detrimental on several levels.

Which makes Parks’ false statements — and the district’s reluctance to reopen — inexplicable to Sutton.

“Most school districts in Kansas have adopted some great protocols to keep kids in school and keep them safe, and are being quite successful,” Sutton said. “But then there are other districts.  Never in my wildest imagination would I have thought that a school board and school district would say, ‘Fine. We just won’t educate them.'”