Despite recommendations from pediatric experts and others saying schools be opened, Democrat Kansas Governor Laura Kelly announced Wednesday she would be issuing an executive order July 20, extending her school shutdown until after Labor Day.  Her rationale?  Giving school administrators more time to prepare (which they’ve been doing since March).

The announcement came just hours after the Kansas State Board of Education voted 9-0 to approve a more-than 1,000 page set of guidelines for reopening schools, the vast majority of which is devoted to curriculum issues (and some self-congratulating).

If approved by KSBE, schools would not open until sometime after September 7.

KSBE Board Secretary Peggy Hill said Thursday that no vote has currently been scheduled and that the board must act “within a reasonable time” once it receives the executive order.

Kelly also reportedly intends to order schools to enact many of the provisions of the KSBE guidelines — which the board had stressed were not mandatory — stripping away local control and forcing schools to adopt measures which may not make sense for individual districts.

“I cannot in good conscience open schools when Kansas has numerous hot spots and cases are at an all-time high and continuing to rapidly rise,” Kelly said at a Wednesday news conference. “Putting nearly half a million kids in daily large gatherings is the exact opposite of what health experts have urged us to do.”

However, that assertion appears to be contrary to the facts on the ground — and the actual science.

A Reuters story, run by US News & World Report, notes a German study of students actually attending classes found that schools may not be much of a factor in the spread.

Germany began reopening schools in May, and the study by the University Hospital in Dresden analyzed blood samples from almost 1,500 children from 14 and 18 and 500 teachers from 13 schools in Dresden and the districts of Bautzen and Goerlitz in May and June.

According to Reuters, “Of the almost 2,000 samples, only 12 had antibodies, said Reinhard Berner from the University Hospital of Dresden, adding the first results gave no evidence that school children play a role in spreading the virus particularly quickly.”

Reinhard told Reuters children may even act as a sort-of firewall against spread.

“Children may even act as a brake on infection,” Reuters reports Berner told a news conference.

He added infections in schools had not led to an outbreak, and the spread of the virus within homes was also less rapid than previously thought.

Moreover, the death rate among people not in the high-risk groups is almost statistically nonexistent, as shown in this data analysis.

In fact, this updated data from July 15 shows almost as many people in that age group died from influenza this year (152) as COVID (now 188).  For kids aged 5-14, there have been 14 COVID deaths but 47 deaths from influenza. 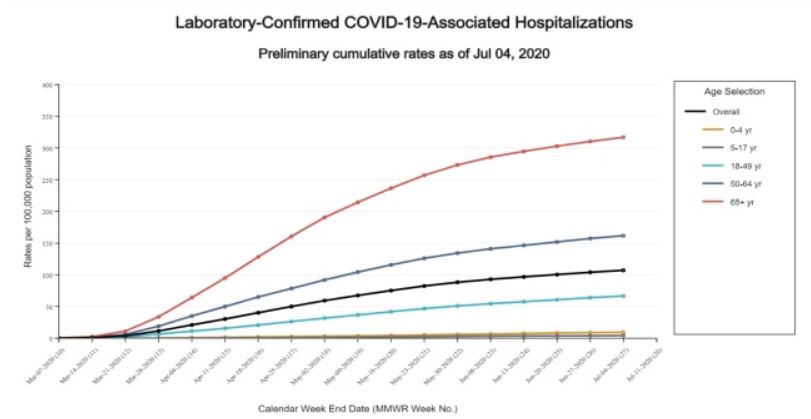 Nor is transmission to parents or teachers particularly likely.

National Public Radio (NPR) reports that in an “unscientific survey of child care centers, Brown University economist Emily Oster found that, as of Tuesday afternoon, among 916 centers serving more than 20,000 children, just over 1% of staff and 0.16% of children were confirmed infected with the coronavirus.”

Child care centers are unlikely to be able to observe anything like the sort of social distancing and other requirements Kelly appears to be contemplating.

The damage to educational attainment from long school closures is self-evident, but researchers warn the impacts go far beyond just falling behind on learning.

In a May 14 story, NPR says children may be facing major mental health challenges as well.

“Nightmares. Tantrums. Regressions. Grief. Violent outbursts. Exaggerated fear of strangers. Even suicidal thoughts,” the story reads. “In response to a call on social media, parents across the country shared with NPR that the mental health of their young children appears to be suffering as the weeks of lockdown drag on.”

Dr. Dimitri Christakis is one of the nation’s most prominent pediatricians and suggests that keeping schools closed will cause harm to vulnerable children.

Christakis, who directs the Center for Child Health, Behavior and Development at Seattle Children’s Hospital, is the editor-in-chief of the Journal of the American Medical Association (JAMA) Pediatrics and argues in a recent editorial that the mental health impacts may be far worse than the nearly one-third slide in educational progress expected by educators.

“The social-emotional needs of children to connect with other children in real time and space, whether it’s for physical activity, unstructured play or structured play, this is immensely important for young children in particular,” Christakis told NPR.

Additionally, a JAMA Pediatrics study, he said, documents elevated depression and anxiety among children under lockdown in China.

But beyond mental health, there will be physical impacts.

Schools are often the first line of defense for children in recognizing cases of child abuse or neglect, and at-risk students have now spent months essentially locked up with their abusers, with no way to get help.

According to an article at Chalkbeat.org, between March and April, as many as 200,000 child abuse cases went unreported because students were not where teachers — who are generally trained to watch the signs — could spot them.

A paper published by Social Science Research Network that focuses on Florida, notes allegations of child maltreatment plummeted across the state in March and April as schools closed.

“About 15,000 fewer allegations have been made, more than a 25% decline,” Chalkbeat reporter Matt Barnum writes. “Another way of looking at it: usually there are nearly 30 claims of abuse for every 1,000 children in Florida; in April, there were fewer than 20.”

This isn’t limited to Florida, however, and it is unlikely the steep drop in reports means there were actually fewer cases.

“In April, the Associated Press reported steep drops in calls to child abuse hotlines in several states: declines of 50% in Washington, 45% in Louisiana, Montana, and Oklahoma; 33% in Arizona; and 14% in Nevada,” Barnum reports.

While only roughly 10 – 20 percent of claims are substantiated, those numbers suggest as many as 20,000 to 40,000 children across the country have spent the last several months locked up with, and unable to escape, their abusers — a situation which Kelly proposes to extend by three weeks.

This isn’t the first time, and likely not the last, that Governor Kelly prioritizes government interests over those of students and taxpayers, says Kansas Policy Institute CEO Dave Trabert. (KPI owns the Sentinel.)

“She vetoed much-needed tax breaks for people last year so she could spend more money.  She sided with city and county officials in vetoing property tax transparency and waivers of penalty and interest late property tax payments during COVID this year.  And now she’s endangering children so school administrators have more time to prepare…if that’s even the real reason.”

The real reason certainly isn’t serious consequences from an increased COVID caseload.  As the Sentinel reported on Monday, hospitalization and death rates are declining.

KSBE will presumably meet next week to vote on Kelly’s executive order, and it is unclear at this time if the board is in favor or not.

It is also unclear if local school board will have the ability to opt-out of these ‘proposals’ or will be required to toe the state line.

Parents who are concerned can, of course, contact their state school board member, or local school boards to express any issues they may have.

‘Innocent Owner’ finally gets his Corvette back from Kansas Highway Patrol