Miami County commissioner Danny Gallagher issued what Kansas State Sen. Molly Baumgardner calls a thinly-veiled threat in retaliation over her supporting legislation that requires local officials to be honest about the entire property tax they impose. Gallagher represents Richland, Stanton, Osage, Sugar, and Middle Creek, Miami, and south Paola on the Miami County Commission. His district includes the home of Baumgardner, and he sent a text telling her he questioned whether to vote to approve maintenance on her rural road, because of her support for a legislative proposal.

“This past Wednesday, we talked at length and voted on the asphalt and chip seal program for 2021,” he texted to Baumgardner in late January. “The road department was proposing to chip seal Club Estates. I was hesitant to vote yes on this thinking here we are spending property tax money to improve our senator’s road and she wants to make it harder for us to do business here at the county.”

And then, “We could save a lot of property tax money by putting 295th Street and Club Estates back to gravel,” Gallagher wrote. “So I’m asking, is that OK with you so we can cut property taxes?”

Baumgardner voted in committee to forward SB 13, the Truth in Taxation Act,  to the full Senate for consideration. Though she supports the measure, Baumgardner wasn’t present when the Senate voted. Her husband suffered a heart attack, and she was at the hospital. However,  the proposal passed the Senate 34-1 with bipartisan support. Under the proposal, city and county officials must publish a notice of their intent to raise property tax, host public hearings, and then vote on the entire tax increase they impose. Lawmakers passed similar legislation last year, but Gov. Laura Kelly vetoed it. Due to the pandemic, legislators didn’t return to Topeka to attempt an override.

Currently, local officials vote to approve budgets — not taxes. Once a city or county adopts the budget, the clerk calculates the tax rate required to generate the funding to cover the budget. The rules allow county and city officials to say they’re holding the line on taxes — referencing only the mill rate — even when property owners end up paying more year-over-year due to increased property valuations.

The Truth in Taxation Act passed the Senate on January 14. Kansas House members are expected to pass the proposal this week.

“I just want better communication,” he said. “I just feel like there’s a total lack of it. We don’t know when these bills come up. Also, I would just love to hear from the people who represent us in Topeka. I would love to feel like we’re working together. What we do at the county, what the cities do, what Topeka does, we’re serving the communities and serving people doing the things for them that hard time doing on their own.”

In his text to Baumgardner, Gallagher wondered why schools and state lawmakers aren’t required to notify voters of potential tax increases. However, property taxes related to schools are part of the school finance formula, a regularly litigated feature in Kansas budgeting. Changes to the formula would likely require court approval.

Baumgardner said she was surprised to see an elected official issue a “threat.”

“There is a very chilling effect when a county commissioner publishes a threat of action against a legislator’s neighbors because the commissioner is opposed to a transparency bill that will help all Kansans,” Baumgardner said.

Gallagher said the transparency legislation comes across as if only counties and cities are raising taxes when the state and school budgets increase every year, too. As a commissioner for 10 years, Gallagher says he carries a card showing how local tax dollars are spent. He shows it to constituents when they ask about their taxes.

“Tell me anything here you want to see cut or eliminated,” he said he tells them. In 10 years, I’ve never had one person say, I want one of the things cut. They want their taxes cut, but they don’t want the services cut.” 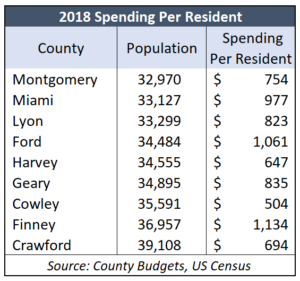 ‘Tell me what to cut’ is a standard retort used by some local officials to cut off discussion.  But as shown in research by Michael Austin at Kansas Policy Institute (the Sentinel’s owner), savings should come from reducing the cost of a service, not cutting the service.

Austin examined 2018 spending by all 105 counties to calculate the amount spent per resident.  He found that Miami County spent $977 per resident but six other counties with very similar populations spent considerably less, indicating those counties are more efficient than Miami.  Those six counties’ spending ranged from $504 per resident to $835 per resident. 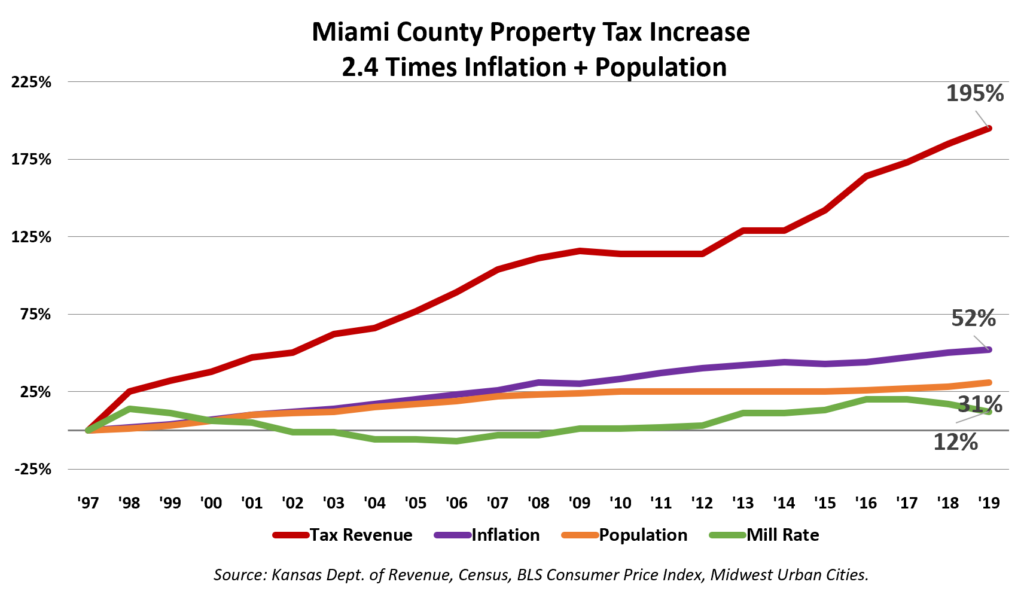 Miami County property tax would be about $7.7 million lower if the dollars increased for inflation and population over the period.  Reducing property tax by that amount would require county commissioners to bring per-resident spending down to $746, which would be about the same level as Montgomery County and higher than amounts spent by Harvey, Cowley, and Crawford counties with similar population levels.

Baumgardner said it’s common for lawmakers to receive emails and text messages from constituents. However, she said it’s unusual to receive vitriol from other elected officials. Instead, they often send polite emails or decide to offer written or in-person testimony in support of or against legislation.

Baumgardner said no one from the Miami County Commission testified or submitted written testimony on the legislation.

“Such actions by an elected official — these threats — are usually referred to as willful misconduct,” she said. “Quid pro quo — I’ll do this for you if you do that for me — should never be condoned,” she said. “It is an ugly example of unethical political behavior that we should never tolerate or turn a blind eye toward.”