The ¼ cent sales tax that was pitched to Finney County voters isn’t living up to its promised “property tax stabilization” but city and county officials want it renewed on August 3 for another 15 years.  The sales tax was initially approved in 1995 and has twice been extended.

Since 1997, Finney County Commissioners have increased property taxes by 133%, according to the Kansas Department of Revenue.  Inflation was 53% over the period and the population is flat, so the 133% increase is 2.5 times greater than the combination of inflation and population. 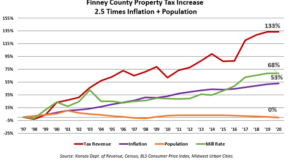 The results are similar in Garden City. The 150% property tax increase is 2.7 times greater than the combination of inflation and population. 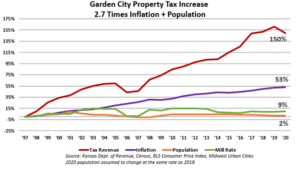 Finney County says the ¼ cent sales tax generates a little over $2 million annually.  The County and Garden City each get about $1 million and the City of Holcomb gets $85,000.

Local officials say the sales tax is used for infrastructure, but the money received by Finney County and Garden City could be found by operating a little more efficiently. 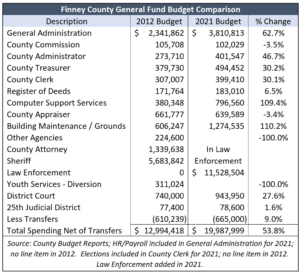 The adjacent table shows the adjusted General Fund budgets for 2012 and  2021.  Two items listed separately in 2012 were moved into General Administration to account for reporting changes. Law enforcement form 2012 is now in another fund but we include it for comparison to the Sheriff and District Attorney General Fund budget in 2012.  A few other adjustments are listed in the source note.  County Administrator Robert Reece said these adjustments present a “reasonably close” comparison.

Total spending for Garden City is up 56% and the General Fund budget is 45% higher.

Engineering, Inspection, and Workers Compensation costs are not shown separately in the 2021 General Fund budget.  Most line items have large increases, including General Administration (46%), Police (58%), Development (386%), Parks (60%), and 46% for the Fire Department.

Most state and local governments use an appropriation process to build their budgets (Dept. A was budgeted $1 million this year and is requesting more next year).

Done properly, a robust Performance-Based Budgeting process identifies operating efficiencies and ensures spending is allocated in accordance with the prioritization of each department.

Efficiencies can also be identified by benchmarking against similarly sized counties.  A 2018 county spending study from the Center for Entrepreneurial Government at Kansas Policy Institute found very large differences in per-resident spending. (The Sentinel is owned by KPI.)

Providing the same or better quality service at a better price allows taxes to be reduced, and that is perhaps the best way that government can stimulate the economy.