Between February 1 and July 11 this year, the Center for Disease Control (CDC) says many more people died of pneumonia in Kansas this year than of COVID.  The CDC downloadable database shows 830 pneumonia deaths, 315 COVID deaths, and 89 flu deaths for the period, although additional deaths may not yet be reported to CDC.  Their disclaimer says the time lag can range from 1 week to 8 weeks or more.

Missouri also had more pneumonia deaths than COVID deaths (1,869 vs. 1016) and adjusted for population (Missouri has about twice as many people as Kansas), the comparison looks much different.  Both states have similar numbers of deaths per million of population for pneumonia (285 for Kansas, 305 for Missouri) and influenza (31 for Kansas, 29 for Missouri).  Kansas has 108 COVID deaths per million compared to 166 for Missouri.

Businesses that government officials determined to be non-essential were shut down in Kansas and Missouri by their governors, but seven states weren’t shut down, and some of them have better COVID results than Kansas.

On the other hand, Arkansas, South Dakota, Utah, and Wyoming each suffered less job loss in June than did Kansas.  As the Sentinel reported last week, private-sector jobs in Kansas were down 5.6% from the year prior but Utah’s loss was only 2.7%; Nebraska and South Dakota fell 4.6% and Arkansas had a 5.4% decline.

The number of new cases reported by the Kansas Department of Health and Environment for the seven days ended July 27 fell from 3,276 a week ago to 2,838 and the mortality rate (total deaths divided by total confirmed cases) held steady at 1.3%.  The number of new deaths rose from 11 to 28 this week but over the last six weeks, the average number of deaths is 14 and down slightly from the previous six weeks’ average of 18.

While most government officials and media seem hyper-focused on the raw number of new cases over the last few weeks, little attention has been paid to the severity of those cases. 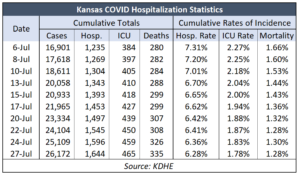 Other highlights from KDHE include: