Kansas Gov. Laura Kelly ranks near the bottom in the class of America’s governors, according to a new report issued by the CATO Institute. Kelly earned a ‘D,’ on the libertarian think tank’s annual report entitled “Fiscal Policy Report Card on America’s Governors 2020.”

“Kelly came into the governor’s office saying that she would stabilize the budget after her predecessor, Sam Brownback had ‘wrecked’ it. Yet in her first year in office, Kelly oversaw a huge increase in general funding spending of 10.3 percent, which included increases on education, public safety and infrastructure,” the report reads. “Those increases were ill-timed because the economic downturn in 2020 has made her program expansions less affordable.”

Not only ill-timed, but also coming on top of record spending by the Brownback administration.  The chart below shows spending is now $2.6 billion more than if increased for inflation since 1995, and that’s part of the reason Kansas is facing a $1.5 billion budget deficit in fiscal 2022. 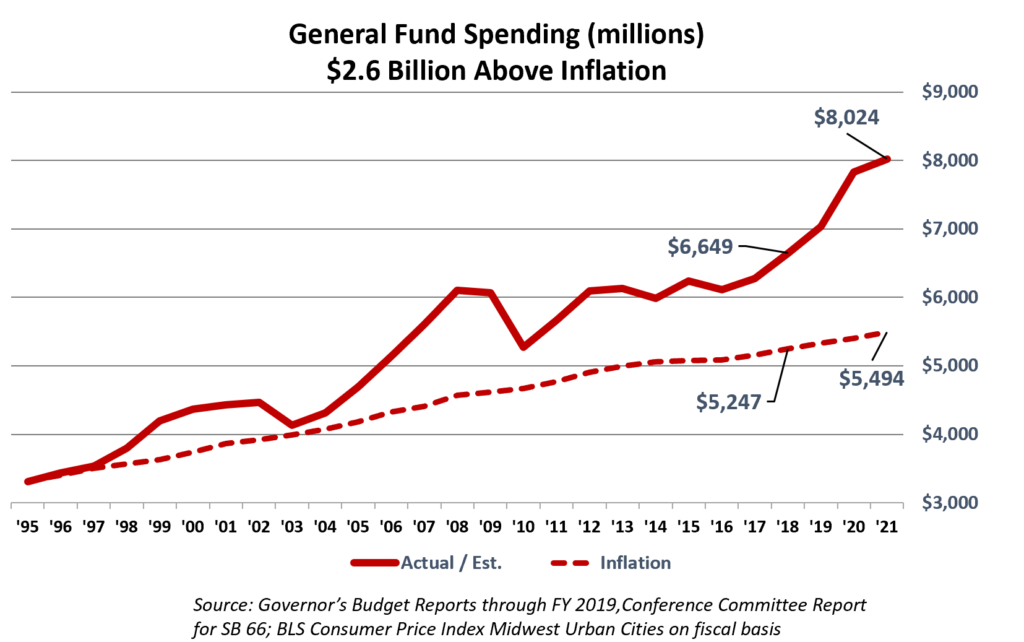 Only four governors earned an ‘A’ on the report. They include New Hampshire’s Chris Sununu, Iowa’s Kim Reynolds, Nebraska’s Pete Ricketts, and Wyoming’s Mark Gordon, all Republicans. Seven governors, all Democrats,  including Ralph Northam of Virginia, Andrew Cuomo of New York, Gretchen Whitmer of Michigan, Phil Murphy of New Jersey, J.B. Pritzker of Illinois, Kate Brown of Oregon, and Jay Inslee of Washington, earned an ‘F.’

The report notes that there have been high-scoring Democrats on earlier reports, but “Republican governors tend to focus more on tax cuts and spending restraints than do Democrats.” 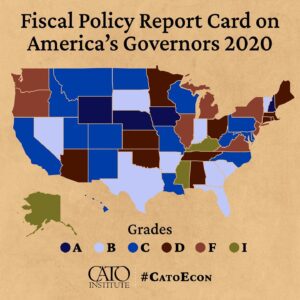 “Among these less-prudent states, New Jersey, Pennsylvania, Illinois and Kansas had saved virtually nothing in their rainy day funds going into 2020, and that was after a decade-long economic expansion,” the report says.

CATO Institute has published its fiscal report card for governors since 2008. In 2012, former Gov. Brownback received the nation’s top grade for instituting tax reforms that simplified the personal income tax structure and saved Kansas taxpayers about $800 million per year.  By 2016, however, his grade had dropped to a ‘D’ as the Kansas Legislature increased a variety of taxes, including cigarette and sales taxes,  to adjust to earlier tax cuts.

“The problem is that the governor and the legislature did not fully match the reduced revenues with reduced spending, which created chronic budget gaps,” the 2016 report read. “The fairly slow-growing economy in Kansas has not helped matters…Brownback’s reforms do not illustrate that state tax cuts are a bad idea, as some pundits have suggested. In most states in most years, government revenues grow as the economy grows.”

CATO never graded former Gov. Jeff Colyer. He hadn’t been in office long when the think tank issued its 2018 report. Former Gov. Kathleen Sebelius received a ‘D’ in 2008, but Kansas Gov. Mark Parkinson, who completed her term, wasn’t graded in 2010.