A bad August jobs report would be front-page news if Kansas had a Republican governor, but mainstream media apparently has no interest in reporting economic shortfalls under Laura Kelly’s reign.

Results released last week by the Kansas Department of Labor and the Bureau of Labor Statistics show there were 53,800 fewer private-sector workers in August compared to a year ago. But Governor Kelly is still protecting state employees; Kansas had one hundred more state employees in August than last year. 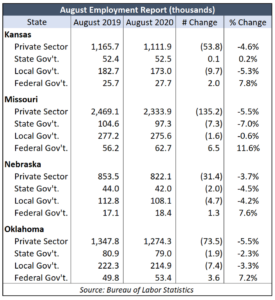 Kansas added back about 5,000 private jobs compared to July but recovering from the COVID impact and Governor Kelly’s shutdown order is very slow; there are still 62,000 fewer private workers employed than in February.

Missouri had about 135,000 fewer private-sector workers than last August, for a decline of 5.5%.  But unlike Kansas Governor Laura Kelly, Republican Governor Mike Parson reduced state government jobs by 7%, with 7,300 fewer than last year.

Nebraska Governor Pete Ricketts, also a Republican, cut 2,000 state government job, with employment 4.5% lower than last August.  The state’s 3.7% private-sector loss of 31,400 jobs is the smallest among the four states, perhaps not coincidentally because Gov. Ricketts didn’t impose a statewide COVID shutdown in the Spring.

Kansas was behind pre-COVID

The private-sector job loss is especially worrisome for Kansas because the state wasn’t in good shape before COVID hit.

Now Kansans face another potential tax increase, as the state has a $1.5 billion budget deficit for the fiscal year starting next July and Governor Kelly is not reducing the state’s operating costs.