In a break from past practice, the 2020 state payroll listing includes some highly paid coaches at Kansas State University.  Compensation for many college coaches is paid with 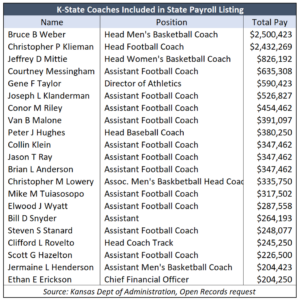 privately raised funds and therefore not subject to Open Records requests, but the 2020 state payroll provided by the Kansas Department of Administration includes 21 coaches from K-State.

Athletic Director Gene Taylor was paid $590,423 and former head football coach Bill Snyder is still on the payroll at $264,193.

The recently terminated athletic director at the University of Kansas, Jeffrey Long, was the third-highest paid state employee; at $1.4 million, he was paid more than twice as much as K-State’s athletic director.

John Tomblin, executive director of the National Institute for Aviation Research at Wichita State University, was the fourth-highest paid at $929,404.

Everyone included in the top 25 worked at one of the state universities except Elizabeth Miller, the Chief Investment Officer at the Kansas Public Employees Retirement System.  Miller was paid $445,847 last year. KPI also collects overtime payments each year, and this year’s list includes someone who was paid more than $100,000 in overtime.

Three public service executives were among the highest overtime recipients last year; Blane Tanner in the Dept. for Children and Family Services (79,400), Devan Tucking-Strickler with the Adjutant General ($70,997), and Roberta Kearney with DCFS ($61,368).  James Copple, a fire protection specialist at Kansas State University was paid $66,896 in overtime.