Wichita Republicans are questioning the political bias of the local paper after the Wichita Eagle published a one-sided story last week.  The story said Republicans are campaigning for their choice candidates in the supposedly nonpartisan city and school board elections and used quotes from a donor to the Democratic candidate in stories about the mayoral race.  But the Eagle didn’t mention that the Democratic party is doing the same for their preferred candidates.

The Eagle headlined an Oct. 25 story, “Wichita’s local elections are supposed to be nonpartisan, but that hasn’t stopped the local Republican Party from reminding voters who its favored candidates are.” The story ignores active campaigning for its endorsed candidates by the state and local Democratic Party, though several days later, the Eagle finally published a story about Democrats campaigning in Wichita city elections.  However, their original story hasn’t been updated yet and still accuses only Republicans of campaigning.

Ben Sauceda, the executive director of the Sedgwick County Republican Party, is quoted in the story accurately, he says. However, he told The Sentinel that the Wichita Eagle made it sound as if the Republican Party was the only party campaigning. That’s not true.

“The Sedgwick County Democratic Party has been promoting (mayoral candidate) Brandon Whipple and even hosted a fundraiser for him,” Sauceda said.

The Sentinel reached out to Lefler, the story’s co-author, for comment, but he didn’t return the call.

“…I find that kind of irrelevant to the discussion at hand, because their posts and your posts have been mostly informational stuff for the party faithful (when and where fundraisers were, how to volunteer, etc.),” Lefler wrote. “If it had stayed at that level, there wouldn’t have been a story. It escalated to the level of a news story when one side, specifically the SC GOP did a widespread mailing that is obvious campaign advocacy addressed to the public at large.”

One day after the Eagle story ran, the Kansas Democratic Party sent mailers in support of Whipple. Two days later, the Eagle published a story about the Democratic mailer, noting it contained untrue statements about Longwell, the Republican candidate for Wichita mayor.

In that story, the Wichita Eagle reporter turns to Russell Fox, a political science professor at Friends University for comment. Fox told the paper that the Democrats’ mailer is sharp, but he uses a moral equivalency argument to mitigate the damage to Whipple. 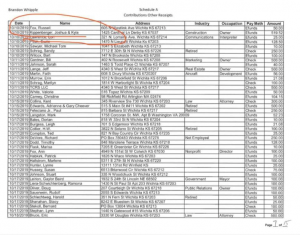 “(The mailer) is not as negative as the stuff that has been run anonymously against Brandon Whipple, and we don’t know really where that came from,” Fox told the Eagle.

The Eagle quotes Fox as an objective political expert without revealing that Fox is a donor to Whipple’s campaign.

Between running the first story about Republicans campaigning for Longwell and a second story admitting Democrats were doing the same, the Eagle endorsed the Democrat.

“Now the state party is getting involved in this race. We’ll see what the Eagle’s response to that is,” Sauceda said.

Lefler concluded his comments on Sauceda’s Facebook page with this: “You can feel free to disagree with me, but it was a question that had people in the community talking. I write for them, not the party stalwarts on either side.”

“There’s no race that’s too small,” he said. “Yeah, we’re going to be involved in school board, city council, and county races.”