A new study from The Foundation for Research on Equal Opportunity (FREOPP) says America’s schools and colleges can safely reopen during COVID-19.   The authors say, “With the pandemic expected to endure until 2021, and perhaps longer, permanent school and childcare center closures are unsustainable. Policymakers must prepare to make difficult decisions about how to reopen American schools while managing serious public health risks.” 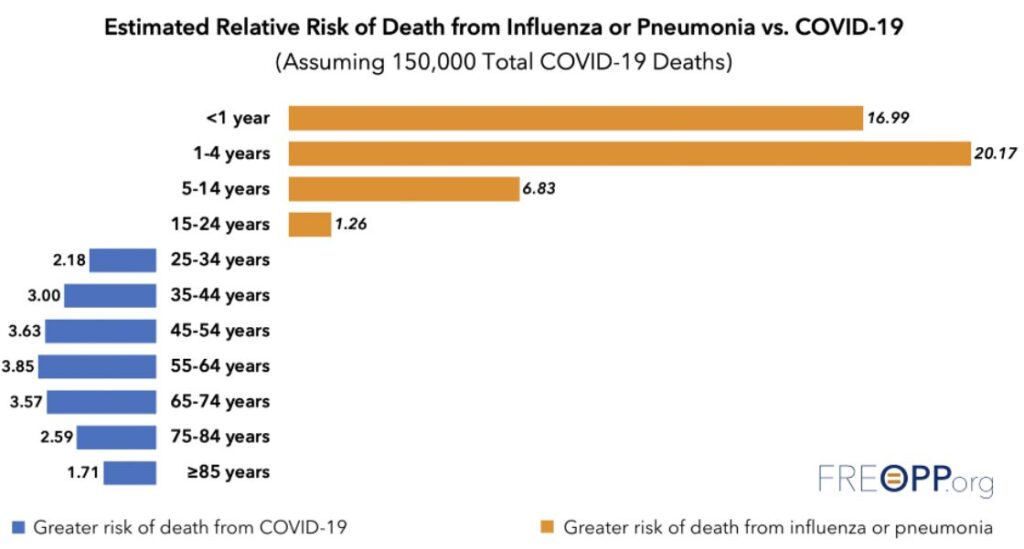 They caveat their finding, based on data from the National Center for Health Statistics, as being highly dependent upon the ultimate lethality of COVID-19, which isn’t known at this time, but say there is already a clear pattern.

“Nonetheless, a clear pattern emerges from what we know, in which those under age 25 are at the lowest risk of death from COVID-19, relative to influenza or pneumonia.”

Similar to findings reported previously by the Sentinel, the authors also say there appears to be “very low risk of transmission of COVID-19 from children to adults.”

According to the authors, several advanced nations reopened their schools in May with few problems, including Austria, Denmark, Finland, the Netherlands, Norway, Switzerland, Australia, New Zealand, and Singapore.

They make several policy recommendations to protect students and adults and also suggest several academic policy revisions based on significant disruptions that occurred as a result of school closings.

“According to the Center for Reinventing Public Education, only ‘one in three districts expect teachers to provide instruction, track student engagement, or monitor academic progress for all students,’ while schools were closed. A national survey of American parents found that 71 percent believed their children learned less than they would have had schools remained open. That survey also found that 40 percent of students had no individual interactions with teachers.”

Colleges, universities, and other postsecondary institutions

The authors cite polling indicating that 76% of students plan to return to campus if they have the option, and they quote university presidents calling for institutions of higher learning to be opened.

“Brown University President Christina Paxson has written that ‘the reopening of college and university campuses in the fall should be a national priority.’ Purdue University President Mitch Daniels argues that ‘failure to take on the job of reopening [college campuses] would be not only anti-scientific but also an unacceptable breach of duty.’”

The authors make several recommendations to improve the academic environment, including:

The authors say theirs is a working paper that will be continuously updated with new evidence and policy ideas. Revisions will be noted at the end of the paper and readers are encouraged to check back frequently.