Kansas Governor Laura Kelly said her statewide shutdown order was necessary to “slow the spread” of COVID-19, but data from Worldometers.info shows that states not locked down by their governors have a far lower COVID mortality rate and fewer cases per million of population. 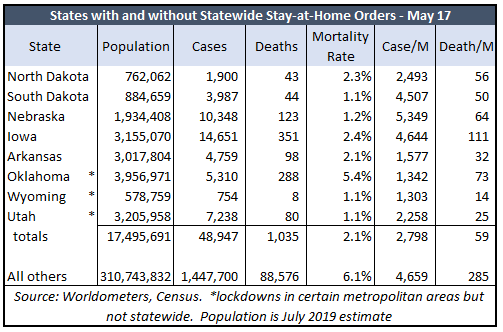 Cases trending down in Kansas

Governor Kelly says the daily increase in cases is still too high to lift her statewide restrictions, but she won’t identify her target level to remove restrictions, and her administration no longer published daily updates.  The Kansas Department of Health and Environment began on May 11 to just update data on Monday, Wednesday, and Friday. 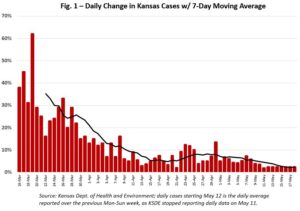 Kansas Policy Institute, which owns the Sentinel, extrapolated the daily rate of increase by calculating the average daily increase based on the actual increase for the week; in this case, the week is Monday-over-Monday.

The average daily increase over the last seven days statewide was just 2.3%.  It’s a bit higher in two counties with outbreaks in meatpacking facilities – 3.1% in Ford County and 5.1% in Finney – but other meatpacking counties are lower; Seward County is just 1.7% and Lyon County is at 1%. 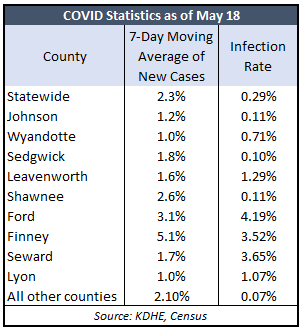 Infection rates (confirmed and probable cases divided by each county’s estimated population) are extremely low in most counties.  There are still 21 counties with no reported cases and the statewide infection rate is only 0.29%.  That’s less than one-third of one percent.

Johnson County, the state’s most populous, is even lower at 0.11%.  The next largest county, Sedgwick, has a 0.10% infection rate.

There are extremely low infection rates and in most counties and the average daily increase in new cases is around 1% for many counties.  This begs several questions:

Unfortunately, Governor Kelly refuses to say, while many Kansans are unable to pay their bills and support their families.