One had to give credit where it is due: the KNEA, the Kansas branch of the National Educational Association, has withdrawn its support for Democrat Chris Haulmark, potentially the first deaf state legislator in the nation. 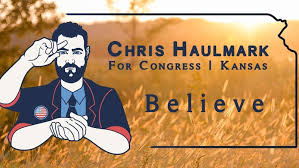 Credit also goes to the Kansas City Star for reporting on the “temperament” issues that caused the KNEA to rethink its support. As the Star reported on October 2, “Three women are accusing a Democratic candidate for the Kansas House of emotional abuse, with one woman alleging the candidate once threatened to burn down a tent with her young child sleeping inside.”

Yes, threatening to burn down a tent with a child inside does speak to a problem of “temperament.” As the Sentinel has previously reported, many in the deaf community had already turned their back on Haulmark, the first serious deaf candidate for the Kansas State House.

Haulmark is running against Republican John Toplikar in the 15th District. By law, Haulmark must remain on the ballot. If he somehow manages to win, he would be the first deaf legislator at a state level in the nation.

On social media, Haulmark has conceded to certain “mistakes” in the past, but in his conversation with the Star he denied many of the accusations and claimed to be a victim of an organized attack by his opposition.