“We can only hope that as Kansans learn more about the issues, their legislators understand the importance of enacting policies that respect the rule of law and limit government overreach into the lives of Kansas families and businesses,” James Franko, KPI Vice President, said.

Franko also said another record was set for scores between 86% and 90%, with 34 members of the House and Senate; the previous record was just eight legislators.

The 2019 index scored votes on 21 bills in the House and 19 bills in the Senate. Legislation scored included HB 2033, which would have returned the federal tax windfall to individual taxpayers; HB 2066, a Medicaid expansion bill; and HB 2223, legislation to track and report the effectiveness of economic incentives offered to private businesses. 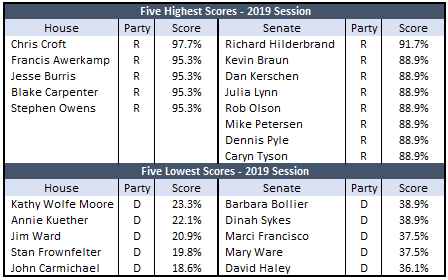 Richard Hilderbrand of Galena has the best score in the Senate, at 91.7%. Seven senators tied for second place at 88.9%: Kevin Braun of Kansas City, Dan Kerschen of Garden Plain, Julia Lynn of Olathe, Rob Olson of Olathe, Mike Petersen of Wichita, Dennis Pyle of Hiawatha, and Caryn Tyson of Parker.

Rep. Chris Croft of Overland Park has the best score in the House (and the highest score ever recorded in the Index for a legislator serving a full session) at 97.7%.  Francis Awerkamp (St. Marys), Jesse Burris (Mulvane), Blake Carpenter (Derby), and Stephen Owens (Hesston) rounded out the top five scores and tied for second place at 95.3%.

The Kansas Freedom Index uses a zero to 100% range, with 50% considered ‘neutral’ (voting equally for and against freedom-related issues).

The five lowest scores in the Senate belong to five Democrats. The bottom scorers in the Senate are David Haley of Kansas City at 36.1%, Mary Ware of Wichita at 37.5%; Marci Francisco of Lawrence at 37.5%, Dinah Sykes of Lenexa at 38.9%, and Barbara Bollier of Mission 38.9%. Bollier and Sykes, former Republicans, switched parties shortly after the 2018 election.

According to Franko, the Kansas Freedom Index is a nonpartisan, educational tool.

“The KFI has never been about Team Red or Team Blue. It has always been about issues and how people view the role of government in people’s lives,” he said. “The KFI captures how legislators vote, not their party registration.”

In past years, Franko said it was not uncommon to have Republicans at the top and bottom of some lists.

“Each session presents a different basket of votes, so who knows if this is a blip or a start of a trend,” said KPI Vice President James Franko.  Franko hopes it’s a trend, which would be good for preserving Kansans’ liberty.

KPI, which owns The Sentinel, has published the freedom index since 2012. In 2015, the free-market think tank began tracking lifetime freedom indexes for lawmakers who have served at least two years since 2012.

In the Senate, the highest lifetime score belongs to Caryn Tyson, at 81.4%. Richard Hilderbrand and Dennis Pyle at tied at 80.2%, Larry Alley (Winfield) is at 80%, and Mary Pilcher-Cook comes in fifth at 79.3%. The lowest lifetime score belongs to Dinah Sykes, at 27.5%.  Marci Francisco has the next lowest score at 30.2%, followed by Republican Sen. John Skubal of Overland Park at 31%, Democrat Tom Holland (Baldwin City) at 31.9%, and Democrat Anthony Hensley (Topeka) at 32%.

The  Kansas Freedom Index is intended to provide educational information to the public about broad economic and education issues that are important to the citizens of our State. It is the product of nonpartisan analysis, study, and research and is not intended to directly or indirectly endorse or oppose any candidate for public office.