The Kansas Department of Health and Environment claims to not know how many people have died so far this year, but provisional data from the Centers for Disease Control show total deaths are running ahead of 2019.  The Sentinel’s analysis of the data indicates it’s likely that the percentage increase will be higher than in prior years, but the nature of the available data makes a precise estimate harder to identify.  It’s not surprising to see an increase in total deaths given the seriousness of COVID and that total deaths increase most years, but the data provide context for posing additional questions. 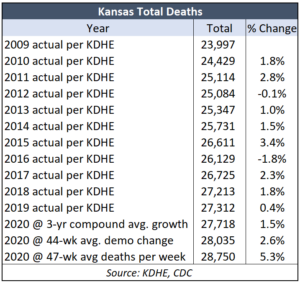 The demographic comparison is helpful to understand changes by age group but knowing that the average weekly death count for the first 47 weeks is higher, the final count is more likely to be closer to a 5.3% annual increase.

However, it cannot be determined how many of the increased deaths this year should be attributed to COVID at this time, if ever.  For one thing, no one knows how many reported COVID deaths are people who died with COVID, rather than people who died from COVID.

There are also other important caveats to keep several caveats in mind that would impact that determination.  The CDC numbers are considered provisional; the data isn’t audited and some deaths may not be reported yet, whereas the KDHE data for prior years is considered final.  Also, there is no data available on the changes in all of the many causes of death for 2020 and KDHE says that won’t be published until June 30, 2021.

Keeping in mind that one can only compare incomplete provisional numbers reported this year by CDC with final 2019 results from KDHE, the age group comparison of total deaths shows counter-intuitive results so far.  For example, total deaths for ages 85 and over would be only 0.8% higher than last year if the current 44-week average holds for the entire year.  KDHE says there were 9,174 deaths at age 85 and over last year and CDC says there are 7,828 this year between the 44 weeks ended February 1 through November 28; if the average weekly number holds for the entire year, there would be 9,251 this year.  That’s a remarkably small increase, given that the elderly are far more susceptible to COVID;  in fact, KDHE says 37% of all COVID deaths occurred in adults aged 85 and over as of December 2 while that age group comprised only 3% of reported cases.  It also supports the concern that some deaths attributed to COVID may have been caused by something else. 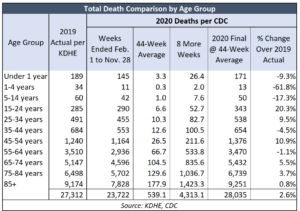 Deaths for children up to 14 years of age are trending 17% lower this year overall but there is a 20% increase for people aged 15-24.  KDHE says there are only 4 COVID deaths for ages 18-24, so it’s hard to imagine that COVID is the cause for the increase.  It will be interesting to see if teen suicide is playing a role in this increase when that information is published next June.

Public opinion on COVID’s impact on total deaths runs the full gamut.  There are those who believe the impact is negligible, with most deaths being miscoded as COVID; others, particularly some in media, act as though every death that state and local health departments attribute to COVID wouldn’t otherwise have occurred.

The data suggest that reality lies somewhere in between and will be further developed as more data becomes available.