It may not have been intentional, but a July 29 story in the Wichita Eagle misrepresented the trend of COVID-related hospitalizations in Kansas.  The story said hospitalizations and deaths were outpacing the increase in new cases, but they only reported the change over two days; the weekly and cumulative changes throughout July, however, are fortunately just the opposite. 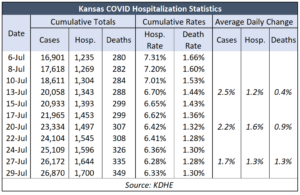 Fear and obfuscation can be avoided

Part of the blame for unnecessarily spreading fear lies with the Kansas Department of Health and Environment, which refused Open Records requests for such information over time.  Governor Kelly also ignored a request for more transparency submitted by House Majority Leader Dan Hawkins (R-Wichita).

The Sentinel and our parent company, Kansas Policy Institute, began tracking the KDHE data in the above table upon learning that KDHE refused to provide the historic data people need to reach their own informed opinions.

The Wichita Eagle in particular and media in general are also to blame.  Reporters and news editors know that two days do not constitute a trend, and they also know that many people are very frightened by COVID.

But reporters tell us too many media owners and upper management judge their work based on the number of online ‘clicks’ more so than basic journalistic principles. When that happens, truth and perspective are the victims, along with the readers and viewers who are unnecessarily frightened.