Every time a government entity creates or contributes to a problem, the proposed solution is inevitably more government.  The City of Prairie Village is doing just that, with a special committee to examine housing affordability, and you can bet the mortgage that more government intervention will dominate the recommendations. 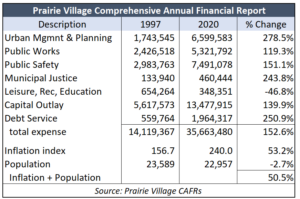 According to the Shawnee Mission Post, the committee is well aware that rising property taxes are an issue, but the problem is not rising values as the SMP states; excessive government spending and taxation to pay for it is the problem.

Spending jumped 153% between 1997 and 2020, according to the city’s Comprehensive Annual Financial Reports (CAFRs).  That is more than three times the combined change in population and inflation.  Urban Management and Planning spending soared by 279%.

Excessive spending leads to excessive taxation, so it’s no surprise that Prairie Village city council members hiked property tax by 209% over the same period.  That is more than four times the combined change in population and inflation. 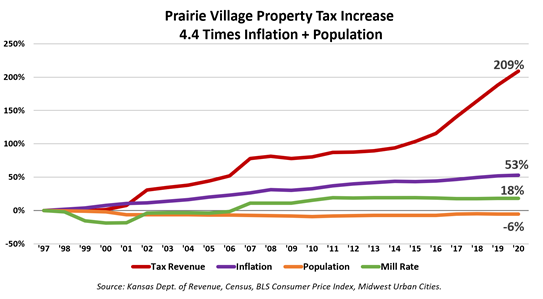 And isn’t it ironic that Prairie Village’s population declined 6% while Urban Management and Planning jumped 279%? That seriously calls into question whether all that planning is for the benefit of residents or for the growth of government, including higher development and regulation costs.

Property tax is a significant portion of homeowners’ mortgage payments, and likewise forces landlords to raise rents.  City Council just voted to make it worse with their decision to impose a 5% property tax increase next year.

Instead of a committee to recommend more government intervention in the housing market, Prairie Village city officials need to take a long look in the mirror. 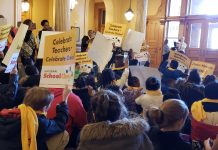 Schools won’t talk about getting 135,000 students to grade level