The City of Overland Park is proposing a 6.2% property tax hike next year, according to their proposed 2021 budget.  The increase is all attributable to valuation increases, as city officials don’t plan to change the mill levy.

If City Council members approve, Overland Park will have increased property taxes by 336% since 1997.  That’s 3.4 times the combined rates of inflation (54%) and population (46%). 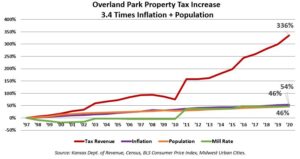 Opposition to Truth in Taxation

Legislation overwhelmingly passed in the House and Senate would have required city and county officials to vote on the entire property tax increase they impose starting next year, but Governor Laura Kelly vetoed it this week.  According to several legislators, Kelly spokesperson Tim Graham said she vetoed the bill because the League of Kansas Municipalities didn’t want it.

The City of Overland Park testified against the bill in March, as did the Overland Park Chamber of Commerce, despite public opinion polling showing 75% of voters approve of Truth in Taxation.

Efforts to revive Truth in Taxation in this week’s special session were thwarted because not enough legislators were willing to stay in session to override another Kelly veto.  Legislators cannot raise campaign funds while in session, so they wanted to keep the session short.

According to the proposed budget, Overland Park intends to increase operating spending by more than 15% next year.  The budget ‘talking points’ reference a much small increase of 2.8% by comparing to this year’s budget instead of this year’s actual spending.  It’s a common government practice to compare to prior budgets instead of actual spending, but that often produces misleading information to taxpayers.

Community Development has the largest budgeted increase, at more than 18%.  Public Safety is budgeted to increase by 17.4%, Public Works gets an 11.8% jump, and Finance and Administration would go up 10.2%.

According to Open Records requests submitted by Kansas Policy Institute, which owns the Sentinel, Overland Park spent $66.5 million on payroll in calendar year 2019.  That was a 4.2% increase over the prior year. 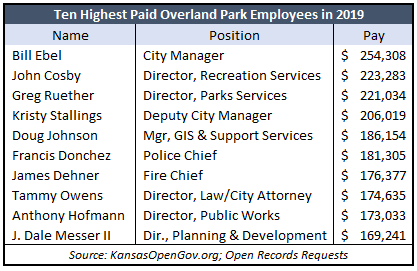 Over 100 Overland Park employees were paid more than $100,000 last year.  The complete payroll listing is available at KansasOpenGov.org.

The Overland Park website says City Council committees will each review their respective areas of the budget during the month of June.  A public hearing and adoption of the budget will be scheduled for August.