Another Johnson County teenager committed suicide last week due to COVID restrictions imposed by school boards and county health officials, according to people close to the family who spoke with the Sentinel.  There’s nary a mention in local media, however, as they largely ignore the consequences of actions attempting to control the spread of a virus with a 98.8% survival rate.

We’re inundated with ‘breaking news’ alerts about cases increasing but, like the consequences, there is precious little perspective in the rush to scare the pants off people.

There is no official tally of suicides, suicide attempts, and other serious mental health issues related to schools not being fully open, but we know it’s a serious problem.

Job loss and business closure caused by COVID restrictions will also result in suicide and mental health issues on top of the enormous economic consequences.

The #1 job of local school boards is to educate students, but those that won’t allow full-time in-person learning are failing at their mission.  In June, the New York Times reported on research that suggested that “by September, most students will have fallen behind where they would have been if they had stayed in classrooms, with some losing the equivalent of a full school year’s worth of academic gains.”

Education declines worsen with each month that school boards refuse to allow kids in class, and those declines will have lifelong consequences. 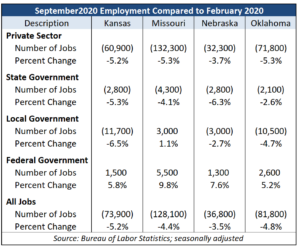 Media talks about the unemployment rate but try to find one story about the fact that there are almost 74,000 fewer people working in Kansas than in February.

Kansas was one of only five states that lost private-sector jobs in September and 25,000 Kansans stopped looking for work last month.

Like teen suicide, these very personal and tragic consequences are shunted aside in the hype over case growth.

People need to know the sobering facts surrounding the serious COVID-19 virus, and given all of the information, they are capable of thinking for ourselves.  Kansans can balance the risks of dealing with COVID against the economic, emotional, and yes, deadly, consequences of trying to reduce case spread.

The number of positive test results is increasing, but an unknown number of them are probably not contagious and state health officials don’t seem interested in dealing with this issue.  The state lab and many private labs are setting the cycle threshold on COVID tests above the recommended level, which, according to CDC calculations and many virologists, will detect non-contagious dead genetic material.

The Kansas Department of Health and Environment responded to our Open Records request for cycle threshold levels on each positive test, saying that information is not provided to them.  So far, they’ve shown no interest in getting it.

Survival rate is high and improving

Charts and tables posted in the COVID Information Center at Kansas Policy Institute show the survival rate improved to 98.8% on October 30. 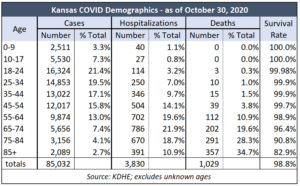 the survival rate in long-term care facilities is just 88.5%, compared to 99.3% for everyone who wasn’t confined to one of those facilities.

Almost half of the deaths attributed to COVID occurred in long-term care facilities. You’d think state health officials would be laser-focused on protecting the most vulnerable, but you could be wrong.  The Sentinel discovered an April 27 memo from KDHE that specifically states, “Long-term care facilities in Kansas cannot and should not turn away new residents or refuse to readmit previous residents for fear of COVID-19.”

The Kelly administration also refused to provide legislators with information about the distribution of Personal Protective Equipment (PPE) despite concern that the state wasn’t meeting the facilities’ needs.

While every death is tragic, total deaths from all causes are so far in line with prior years. 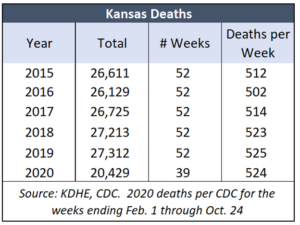 The Centers for Disease Control (CDC) says there have been 20,429 deaths this year in Kansas for the weeks ended February 1 through October 24, putting the 39-week average at 524.  There could be a lag in reporting but so far, it’s good to know there isn’t a spike in total deaths.

There is also encouraging news on hospitalization.

The percentage of reported cases requiring hospitalization in Kansas has steadily fallen, going from 7.3% on July 6 to 4.7% as of October 26.

Hospitals are busy as they always are in the fall but considerable capacity remains.  The U.S. Department of Health and Human Services shows 60% of the inpatient beds in Kansas in use for all reasons as of October 28, with just 7% of the beds in use for COVID patients.  The numbers are similar in Missouri, at 64% and 9%, respectively.

Public and private schools in Kansas and around the nation are safely open and many have been since the beginning of the school year.

Local health officials and school boards must take precautions, but looking at all the COVID data (instead of just a case count or positivity rate) and the horrible consequences of keeping schools closed, they should immediately allow schools to open full-time.

One mother, who begged her district to re-open says she was told, “But what if we do and a child dies?”

Kids are dying, but not from COVID.  They are dying because schools aren’t open.

How many more kids must commit suicide before health officials and school boards relent? 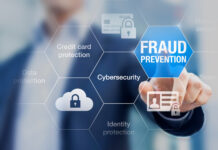