The annual Rich States, Poor States reports from the American Legislative Exchange Council came out this week. Kansas slipped in the rankings to 27th. Takeaways on the national level focus on spending, notably that states spend too much. 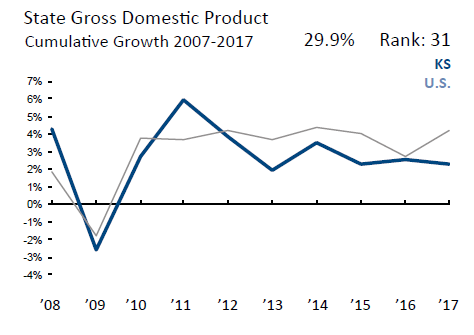 “The cause of this is fairly obvious in having two of the largest tax increases in state history as a reaction to the previous tax reform under Governor Brownback,” says Jonathan Williams. Williams a co-author of the annual study and is also a fiscal policy fellow with Kansas Policy Institute (KPI), the owner of The Sentinel.

Kansas ranked 49th for state legislated tax changes. Yet, it happened at a time when many states, including Missouri and Iowa, cut taxes.

“Kansas comes in 49th when it comes to recently legislated tax changes over the last two sessions. Only one state, on an apples to apples basis, has raised taxes more than Kansas,” says Williams.

However, looking to next year, with Iowa and Missouri cutting taxes in the Midwest region, Kansas is nearly guaranteed a lower rank due to the tax increases.

“With Missouri and with Iowa especially moving up so dramatically, with their tax reforms in the last year, not only would Kansas fall further behind nationally, but regionally I think the picture is even more complicated,” says Williams.

One area where Kansas shined in the study was worker’s comp cost. Kansas ranked sixth for the cost of workers comp in the state average $1.15 per $100 payroll. This makes some of the constitutional arguments facing Kansas’ worker’s comp laws, which we profiled last month, even more compelling.

Should the Kansas Supreme Court rule the worker’s comp law is unconstitutional, and lawmakers on both sides of the aisle have said they believe it is, the price for coverage could go up exponentially. Williams believes Kansas’ ranking and economic outlook overall could be adversely affected if the law is ruled unconstitutional.

“If the court throws out a current regime that has benefited the ranking in our index that could be something to worry about, because if you take away that top ten finish in that category; add some other negative news then I think it is possible that Kansas could find itself in the 30’s when we go into next year’s addition,” says Williams.

Couple the higher taxes and worker’s compensation legal concerns, and a broader picture emerges of Kansas shifting away from national trends. A shift that would occur at the expense of Kansas families. Kansas at the local and state level is keeping sales tax and property tax rates high as seen in the study. Yet, as Williams notes the trend among states is all about taking advantage of tax cuts at the federal level.

“In the last year, we’ve seen a real movement toward states cutting tax rates to be more competitive as a response to Federal Tax Reform. The first in 30 plus years. There is a huge incentive for state legislators to cut taxes this last year since the federal reform broadened the federal tax base, which by extension broadened the state tax bases.”