New data provided by the Kansas Department of Health and Environment through June 8  shows the 7-day moving average of new COVID case increase dropped again this week, to an all-time low of 0.9%.  The previous record low of 1.2% was set a week ago.  The 7-day moving average has declined each week since the state began reopening on May 4. 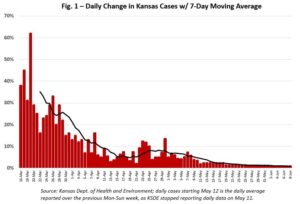 This also marks the sixth consecutive week that the 7-day moving average has declined.  Most of the state began a slow reopening on May 4, when the 7-day average increase was 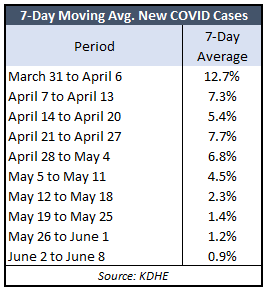 6.8%; some officials feared that reopening would cause a spike in new cases but that hasn’t happened over the last five weeks.

There are still 16 counties with no reported or suspected COVID cases, and another 19 counties have three or fewer.

Just a little over one-third of one percent of the Kansas population has or is suspected to be infected with COVID-19.  The highest infection rates (between 4% and 5.5%) are the southwest Kansas meatpacking triangle of Finney, Ford, and Seward counties.  But fortunately, the meatpacking clusters tracked by KDHE have very low mortality rates.  With just 12 deaths among more than 2,800 cases, the mortality rate is just 0.4%. 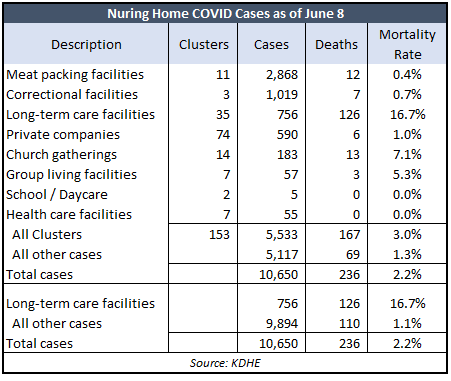 cases and 71% of all the deaths in Kansas.  Long-term care facilities have the highest mortality rate at 16.7%, representing 126 of the state’s 236 deaths.

Three correctional facility clusters account for a little over 1,000 cases – 10% of the state’s total – but with just seven deaths, the mortality rate is 0.7%.

Last month, KDHE Secretary Dr. Lee Norman said he thinks it’s “dangerous” to not have statewide restrictions still in place, but five of the seven states with a lower mortality rate than Kansas weren’t shut down by their governors.  The eight states not locked down also suffered much less job loss in April.