The number of homeschool households doubled in the U.S. between spring 2020 and fall 2020, according to a U.S. Census survey. Last spring, approximately 5.4% of U.S. households with children reported homeschooling. The number nearly doubled to 11.1% later in the year.

“I think the pandemic opened many parents’ eyes to the shortcomings of their children’s school and just how little power they have in the traditional school system to do anything about it,” said Michael McShane,  director of national research at EdChoice.

“It’s clear that in an unprecedented environment, families are seeking solutions that will reliably meet their health and safety needs, their childcare needs and the learning and socio-emotional needs of their children,” Census researchers wrote in their report.

In Kansas, the number of parents choosing to homeschool skyrocketed. In spring 2020, about 2.4% of households with children reported homeschooling. By fall, that number jumped to 10.1%.

Black and Hispanic families have the highest homeschool rates according to the survey.  Black homeschool households jumped from 3.3% to 16.1%; Hispanic homeschool households are also above the national average, at 12.1%.  These growth rates signal significant parental dissatisfaction with the public school system, and with good reason.   The latest state assessment results, for example, show Black high school students are almost twice as likely to be below grade level in math (66% vs. 34%) and White students are almost four times as likely to be on track for college and career (29% vs. 8%).

Minority families tend to benefit the most from school choice but their legislative representatives are the loudest opponents of money-follow-the-child programs. 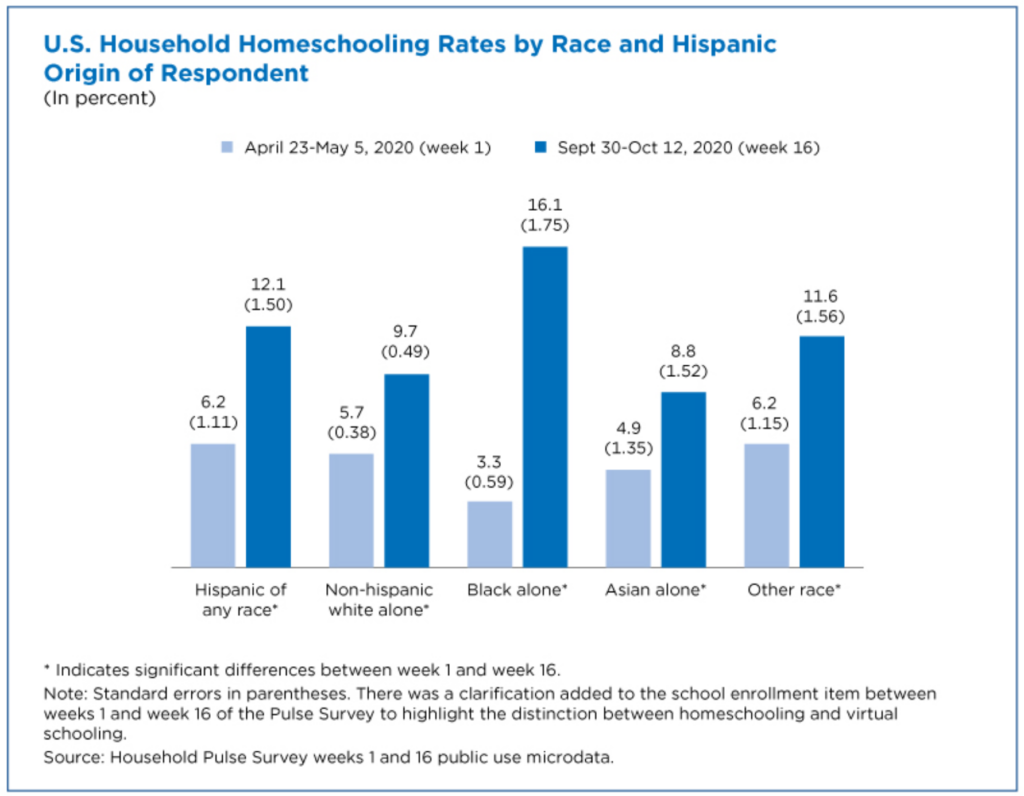 Researchers used a large, nationally representative sample of U.S. households to draw its conclusion that homeschooling today is notably higher than previous national benchmarks. According to the surveyors, homeschool grew rapidly from 1999-2012 before steadying. Historically, approximately 3.3% of families with children homeschool.

“However, the global COVID-19 pandemic has sparked new interest in homeschooling and the appeal of alternative school arrangements has suddenly exploded,” the researchers write.

At Midwest Parent Educators, the uptick in homeschooling interest was noticeable, according to Jacklynn Walters, media director for the organization.

“It’s nice to have more people learning about homeschooling, and it shines a very positive light on homeschooling. It’s given us an opportunity to share what we do,” she said.

The Census research reflects what Kansas lawmakers know: fewer Kansas kids enrolled in the state’s public schools this year due to COVID and the pandemic. Eventually, public schools lose some state funding when enrollment decreases. A large portion of the state’s school funding formula is enrollment-based.

“Ultimately, yes, if parents choose other education options, it will reduce the number of students enrolled, and it will impact their overall funding because to some extent we base it on enrollment,” Rep. Kristey Williams, chair of the House K-12 Budget Committee, said.

However, current law allows districts to use a three-year average of enrollment for funding purposes. It provides a gentle glide in funding reductions rather than an abrupt funding reduction. Meanwhile, homeschooling parents continue to pay taxes for a state service they don’t use or receive while bearing the full cost of homeschooling as well.

Legislation for money to follow the student dies in Senate

The Kansas House passed a funding bill where some funding followed the student. The legislation expanded a tax credit scholarship program for students to attend private schools. It provided parents with an education savings account option to use for educational purposes, including purchases of things like homeschooling curriculum. A tied vote in the Senate doomed the legislation.

However, Williams anticipates school funding legislation will include some of the bill’s provisions when it next meets for veto session in a few weeks. Lawmakers must pass an education funding bill.

Lawmakers appropriate over $5 billion to public schools, and Williams said the appropriations should include policies to advance educational outcomes for Kansas students.

“It would never be my intent to solely pass education funding without some type of policy,” she said.

“The question is who is going to have school choice. Without programs like education savings accounts, tax credit scholarship programs, vouchers, and the like, it will only be families of means,” McShane said. “If we want to democratize school choice and homeschooling, we have to help lower-income families afford it.”