After a scathing editorial by the Kansas City Star called out school districts across Kansas for misusing funding for at-risk students, Kansas Board of Education Chairwoman Kathy Busch wrote a response that, in essence, said that not only was the Kansas City Star wrong but that the Office of Legislative Post Audit — which found many instances of misuse — doesn’t know what they’re talking about.

Busch signed the guest column in her capacity as the board chair but at least one member of the Kansas state school board says she wasn’t speaking for him.

“Essentially, it was her opinion,” Board Member Steve Roberts, said in a phone interview earlier this week. “We have a wide variety of folks on the board that range from liberal to conservative and I would say, in all fairness, it was more her opinion.”

“Most of the at-risk funding we reviewed was spent on teachers and programs that serve all students rather than focusing on at-risk students,” the new report says, adding that, “only 9 (31%) of the 29 programs and practices districts told us they were using were specifically designed for at-risk students,” and “only 3 of the 29 programs and practices were proven to be effective.”

According to the editorial, the audit found “$191,000 of the at-risk funds, the audit found, was spent on such things as a projector, a school nurse, an athletic trainer, playground equipment, postage, a cellphone for a school resource officer, an after-prom party and a copy machine contract.”

“Post Audit found outliers, definitely,” she said.” They identify the outliers, and of the hundreds of school districts, they did only sample 20 of them. And so we know just by this sampling, that there are other outliers, that would probably make folks pretty upset that that’s how that funding was spent.”

In her guest column, Busch said that “The Star relies on a recent Legislative Post Audit report about spending by Kansas school districts that ignores credible research regarding what constitutes best practices for providing support for at-risk students.”

Of course she then later in the piece goes on to say: “A fundamental flaw of the Legislative Post Audit report is that education research doesn’t define best practices strictly, as is seen in many other fields.”

The question, of course, is which is it? Are there best practices or not?

The Kansas Department of Education says measurement on the National Assessment of Educational Progress since 2003 is valid and reliable. Since then, 4th-grade reading proficiency for low-income students barely improved from 18% to 20%, but 8th-grade proficiency declined from 22% to 19%.  But Florida, which spends almost $3,000 per pupil less than Kansas, gained 10 percentage points in both grades and now outperforms Kansas. 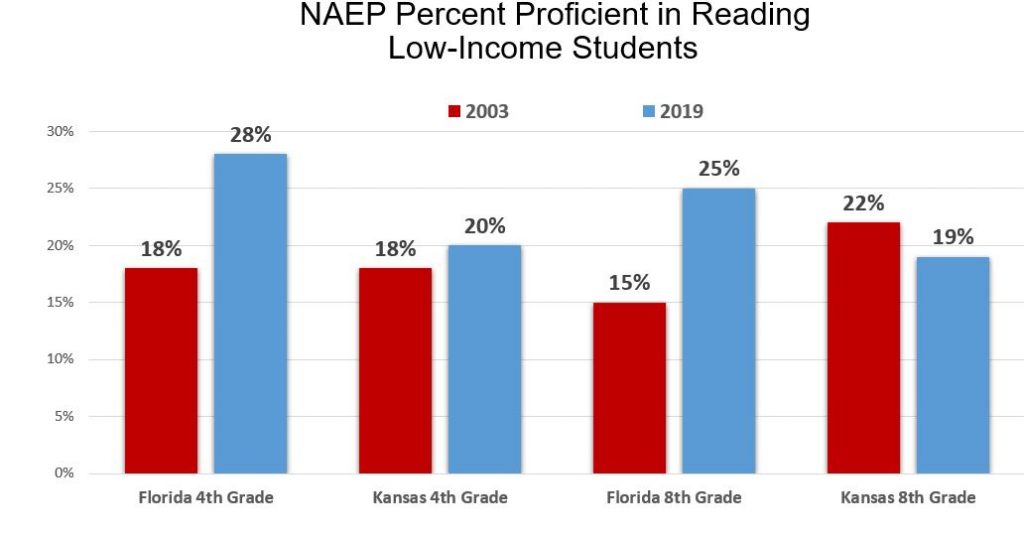 Busch also repeats the oft-quoted stance of the districts that they are underfunded.
“It is important to remember that Kansas schools’ funding won’t be fully restored until 2023,” she said. “Based on accepted legislative remedies, amounting to a settlement agreement in the decade-long Gannon school finance case decided by the Kansas Supreme Court in June. The newly-restored dollars are now beginning to flow — so it is wrong to act as though school districts have always had the resources they are only now beginning to receive.”

But Trabert says Busch is offering up another ‘dog-ate-my-homework’ excuse.

“When the Montoy court said funding was adequate, schools still weren’t spending all the state and local tax dollars they received,” Trabert wrote. “Operating cash reserves jumped from $468 million in 2005 to $705 million in 2009, meaning school administrators put almost a quarter-billion dollars of aid in the bank over that period.”

He also notes that achievement didn’t improve during that time frame despite large funding increases that far exceeded inflation.

“If per-student funding had just increased for inflation, it would have gone from about $7,000 in 1998 to a little over $10,000 in 2019.  Total funding actually exceeded $14,000 last year. Despite such a large increase, reading proficiency for all students on the National Assessment of Educational Progress (NAEP) declined from 35% to 33% (average of 4th grade and 8th grade). The court and Kansas education officials may believe funding causes achievement to improve, but the facts refute those claims.” 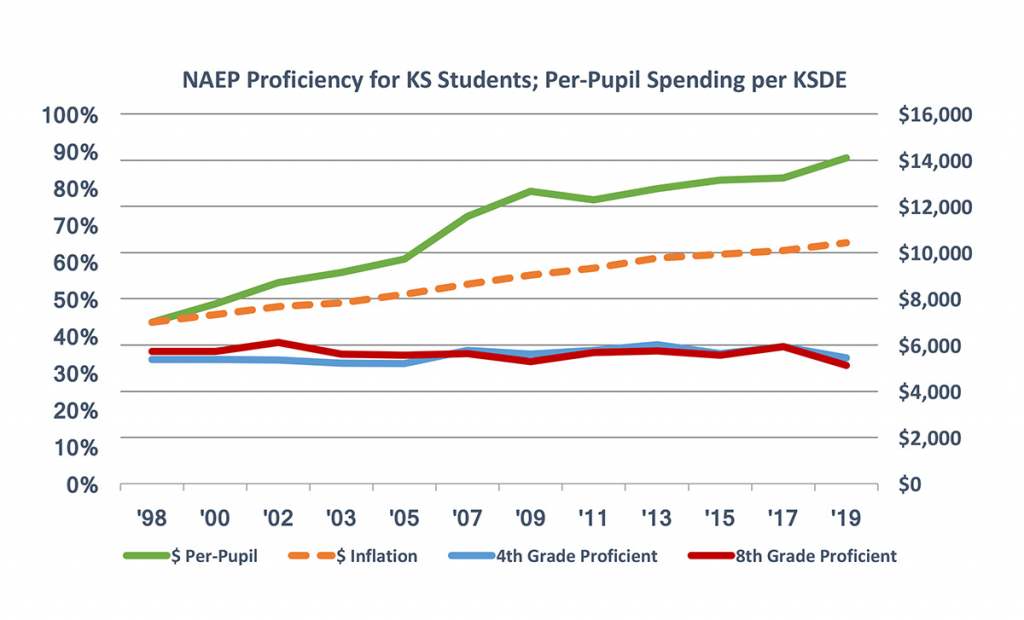 “State education officials should go the extra mile to assure future at-risk monies are spent on at-risk students,” the Star editorial board wrote. “Otherwise they should expect to have the funds cut or cut off.”